This one is exciting for me. For several reasons.

(1) The bathroom is finished. Completed. And it looks great!

(2) I’ve literally been working on this room, off & on, for the entire past year. Literally.

(3) Now, when you walk upstairs, you don’t see this eyesore of a half-demoed room welcoming you to our second floor. (It’s right in your face when you get to the top of our stairs, so I noticed it daily and it vexed me daily for, as said in reason #2, a literal, whole year.

And finally (4) … we are that much closer to finishing the true renovations on this house. We’re down to 3 bedrooms, a few details in the master, and, of course, painting the upstairs doors and replacing that hardware. Oh yeah, and finishing the basement and remodeling the master bathroom – but those are both projects we’ll be getting help with, so until we know exactly what we’ll be responsible for, I’m not adding them to my list. (Plus, it keeps my list shorter. 😉)

Anyway, on to the actual bathroom remodel.

(It’s a pretty long, random post – since I’ve been at this for so long, but not keeping notes – so if you want the gist … the full, upstairs, main/guest bathroom is finished, mostly. There are plenty of pictures, feel free to scroll through. 😊)

This is long, but definitely shorter than my typical remodel story … well, because I’ve been working on the bathroom for a year now, but this blog post for only the last 10 minutes now … so I can’t remember everything?

Setting the scene: The upstairs, hall bathroom is split into 2 rooms. The double sink vanity is in one room, and then the shower and toilet are in a second room. Both rooms had a lot of wallpaper, outdated decor, fixtures that are most likely original to the house, and basically nothing that we wanted to keep.

So, naturally, I started ripping that down the wallpaper right away – because that’s what I do, pull the wallpaper down and put new wallpaper back up. Except this time, I pulled the front of the wallpaper down in the shower/toilet room but the backing didn’t come with it. So, I had to do that a second time around with the steamer to get the wallpaper backing down too. To add to that misery, everything came down in the smallest little pieces … no big sheet pulls for me this time around. There were also layers of wallpaper under the giant, full mirror in front of the sinks; so that also had to be done multiple times.  There was SO much glue.  I mean, SO MUCH. My hands were a mess for weeks after getting all that wallpaper down.

And, after wallpaper removal, it was time to wash the walls.  And wash them again. And again. I think that I actually scrubbed the walls in there 3 times. Did I mention how much glue they used?

(Also, I was able to grab that large slice of wallpaper behind the toilet when we had those replaced in the spring = happy me. 😊) 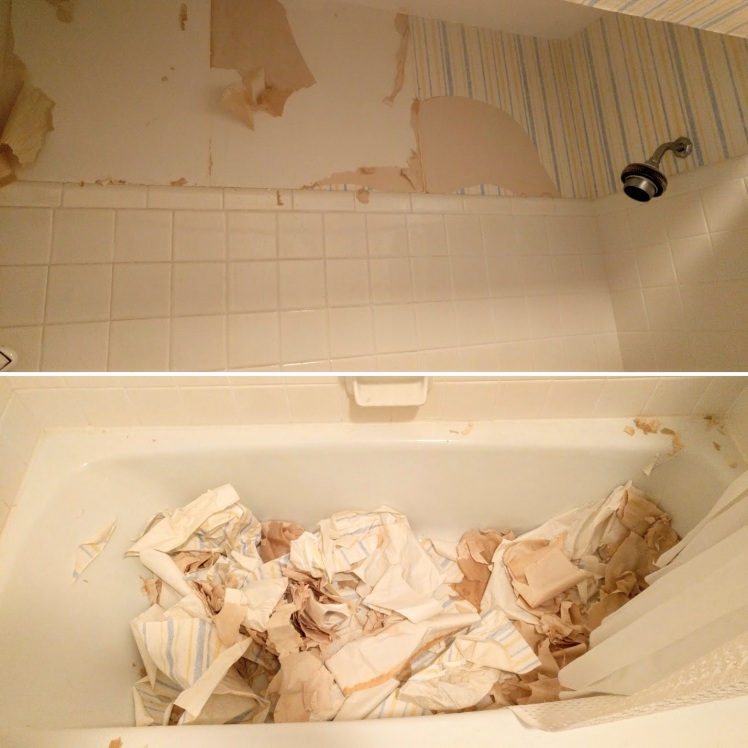 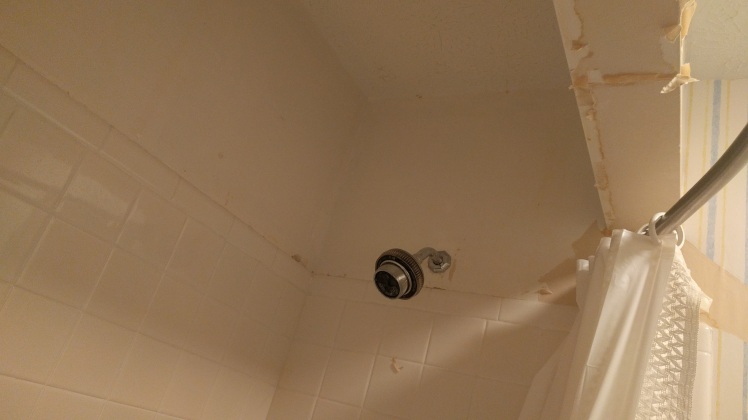 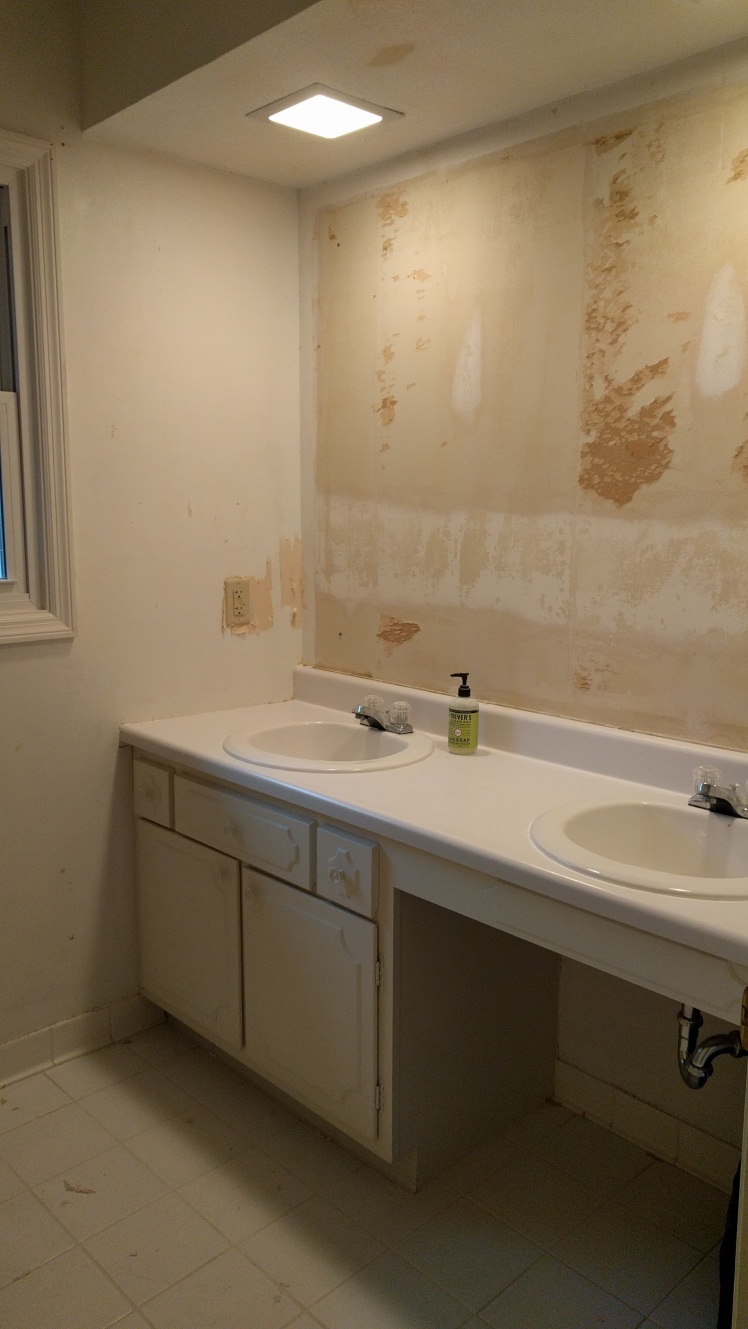 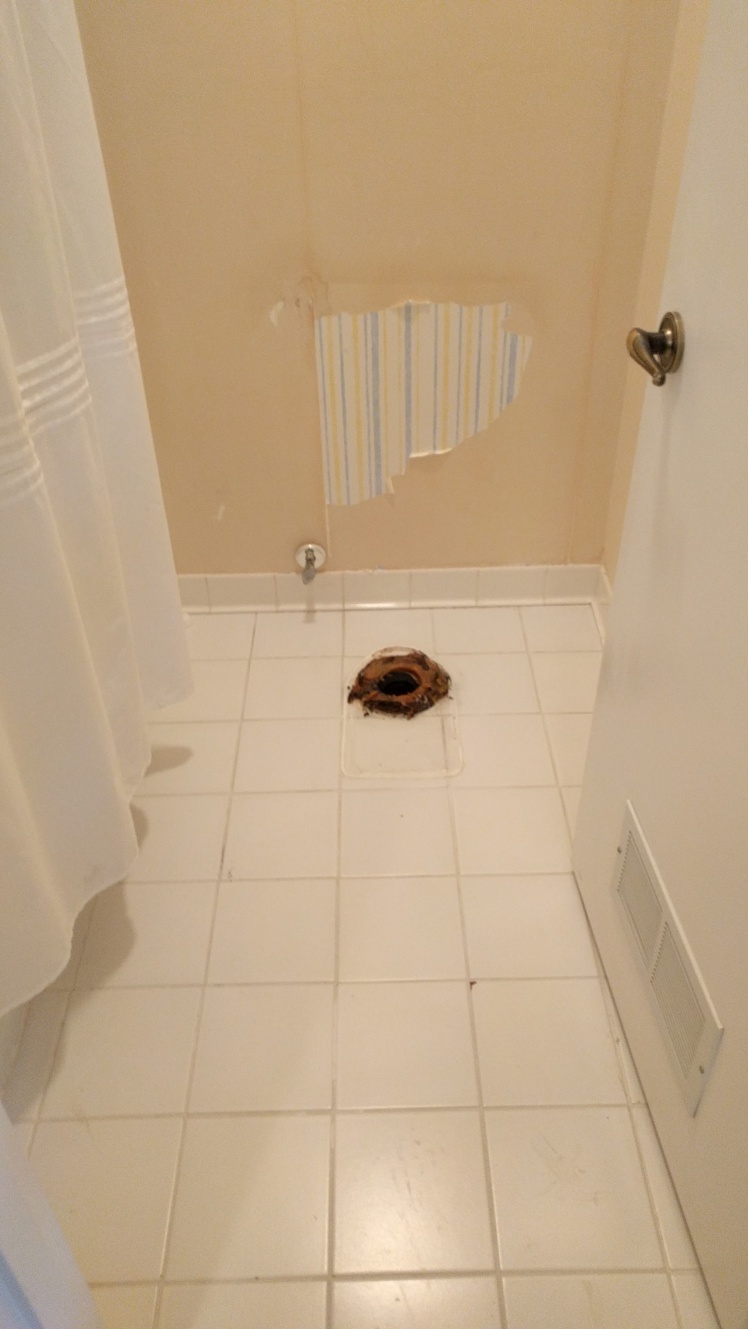 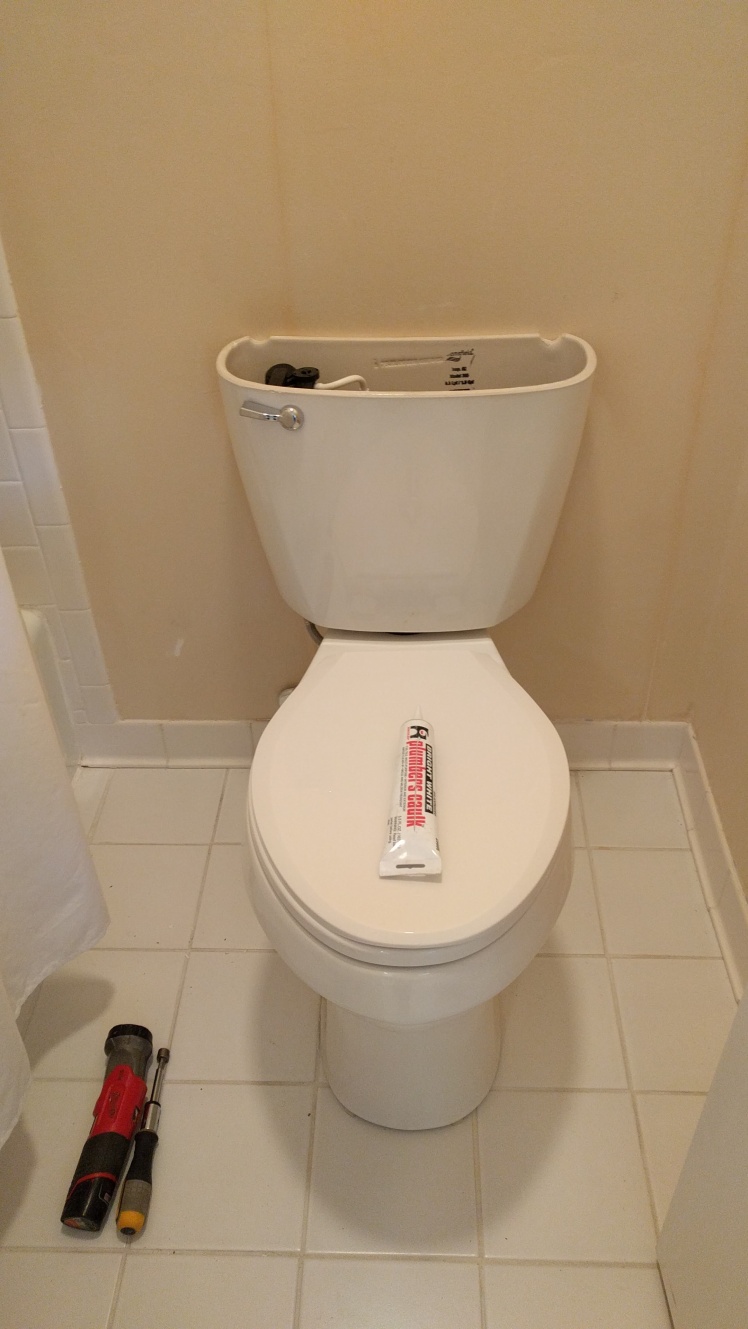 Side note – the process described up until now, took from January 2017 to July 2017, obviously with some long breaks in there. The bathroom remained in this state for about 4 months before I was ready to continue … it has been a process. (Also, we had some guests and it had to be in a minimal, working, usable state for a couple of months over the summer – so we hung mirrors and bought rugs.) 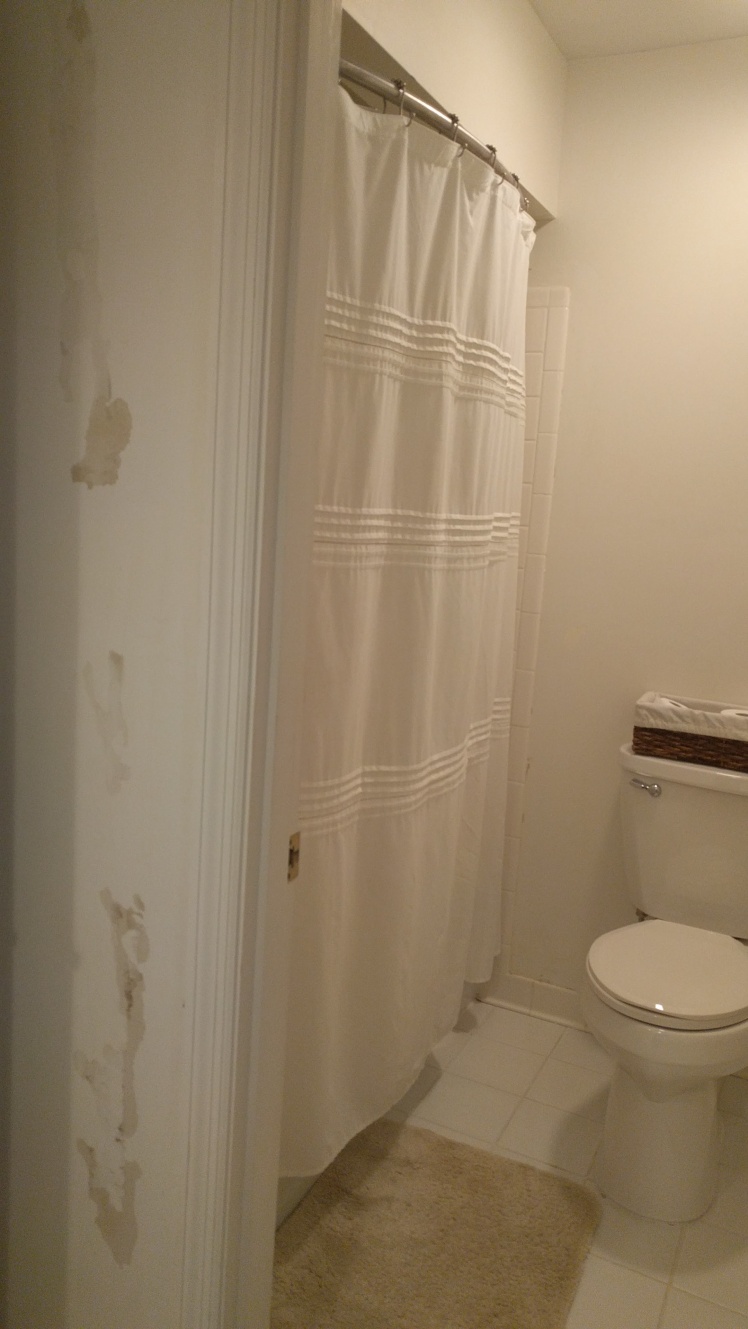 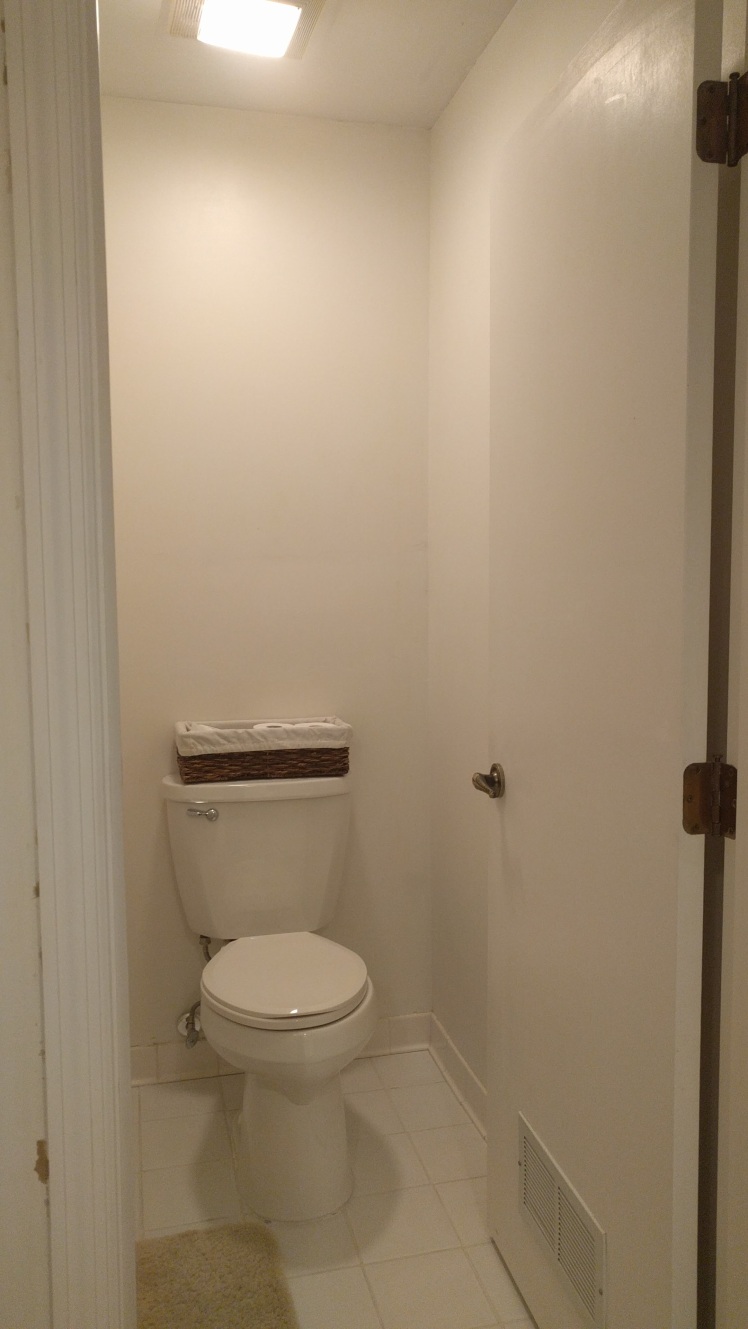 Then, I had to remove the shower rod to remove the wallpaper behind the brackets on either end. (I tried not doing this, but just couldn’t get that wallpaper to rip from behind the brackets = me super annoyed.) That didn’t turn out well. I had planned on putting that same shower rod back up after painting, but it was very attached to the walls (using 4”+ screws and anchors – WHY??? Patrick commented that may he also did pull-ups in there?). So, the screws just stripped and then pulled out of the wall.  Well, this left LARGE holes where the brackets were attached, and dented the brackets in the process; so, a new shower curtain rod it was.

[Only the new has a larger curve to it, combined with having to install it just a little further out because of the large, now-spackled, holes, and it sticks a little too far into the bathroom for my liking. But, it’s staying because it works. It also lets more light into the shower area and looks totally fine.] 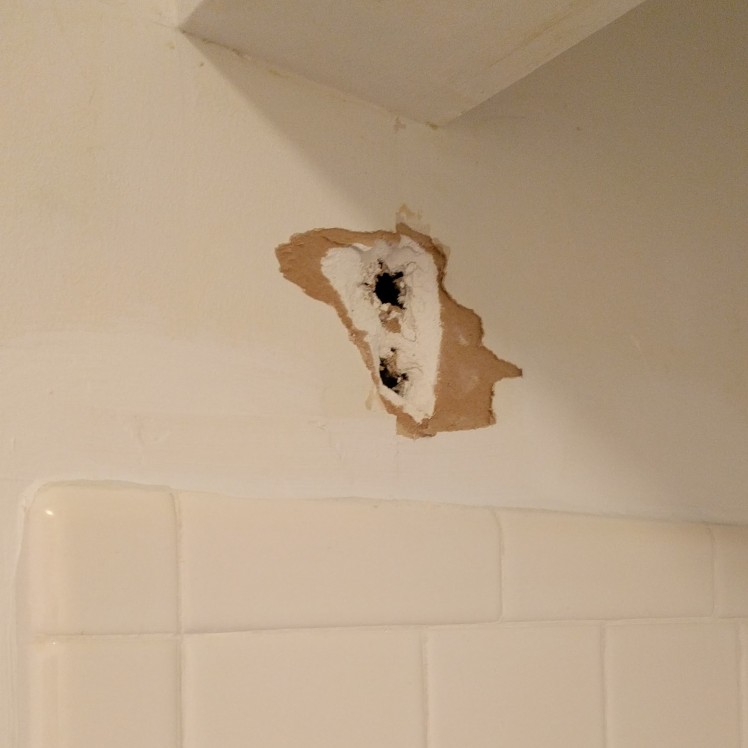 Anyway, all that wallpaper removal and scrubbing, along with the rod removal, left the walls in less-than-stellar shape. Those needed spackling and sanding. Cue more drywall dust everywhere. (I’m so over this one.)

BUT … once that was all cleaned up, we were in business. The upswing. The rebuilding process. My favorite part. 😊

Moving into the priming. Then painting the trim.

The walls behind the mirror were in especially bad shape – and I was re-wallpapering back there. So, I installed a wallpaper liner, so as not to have to actually mud & skim the walls. The wallpaper liner worked well for the small area I used it for; I would not recommend having to use it for large walls or entire rooms. 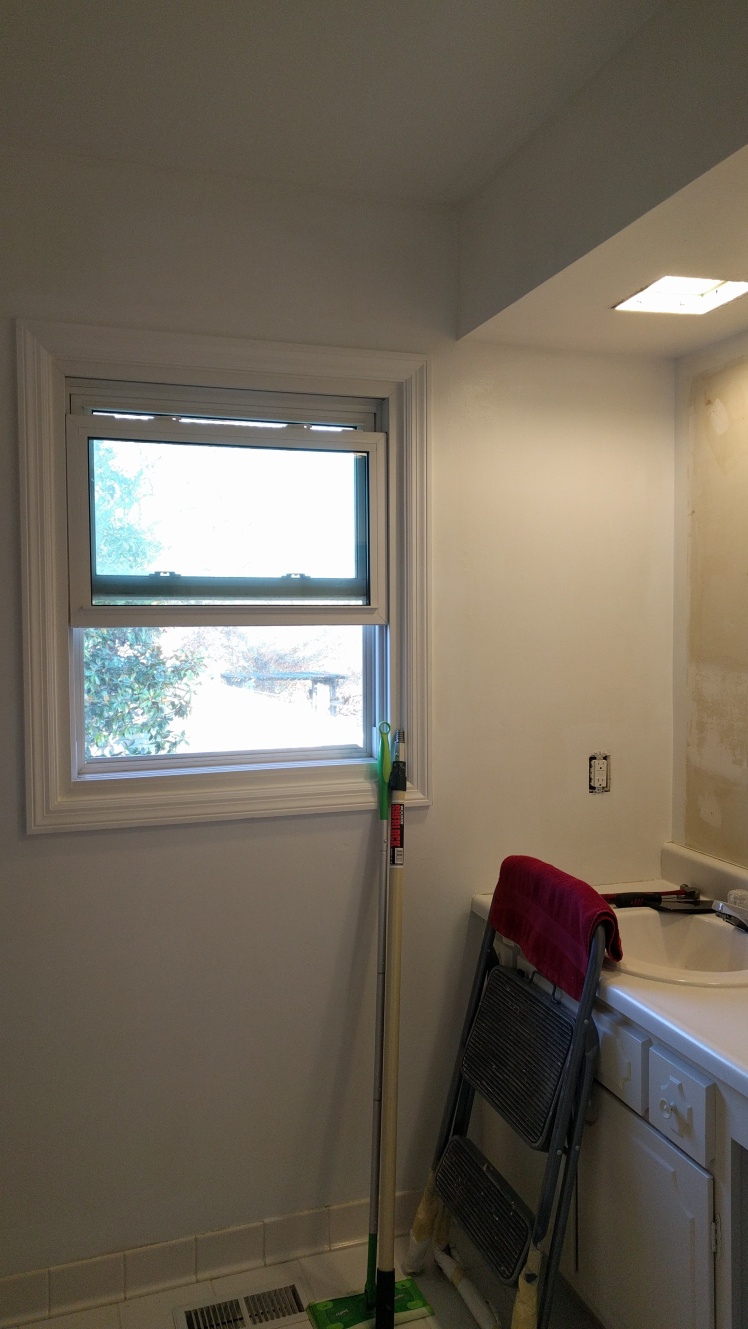 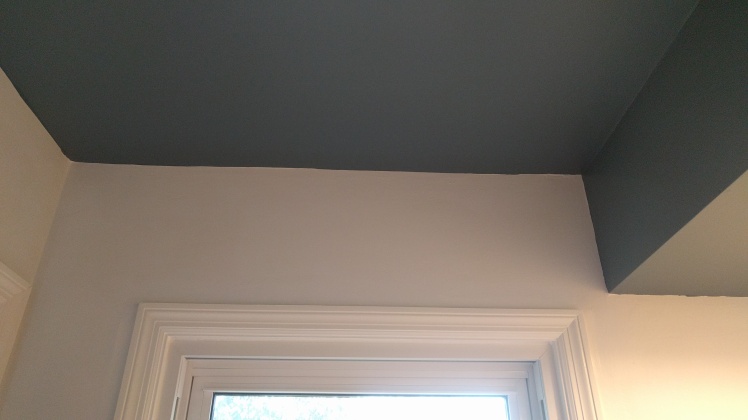 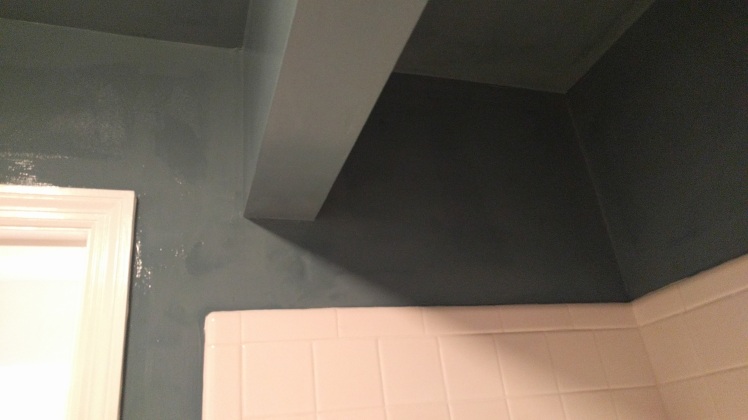 I was planning to replace the drawer and door fronts on the cabinet. But then, I just painted that all too. It seemed like an unnecessary additional project for the guest/hall bathroom. So, while I don’t really like the design-work on the vanity, a fresh coat of paint and new knobs went a long way. (Patrick picked out the knobs and they fit right in!) 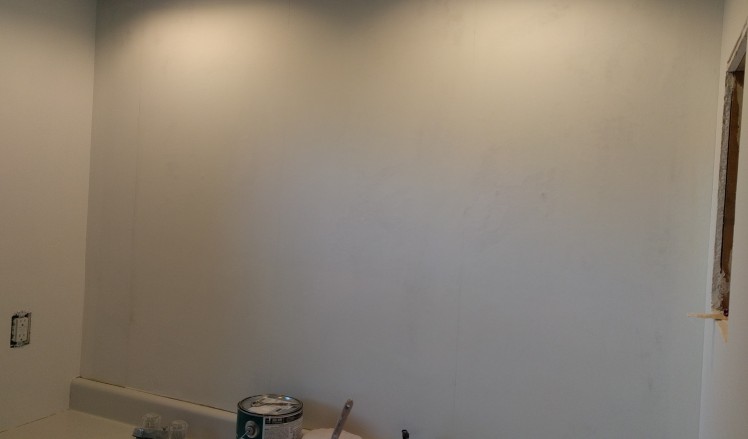 Then I hung the wallpaper.  We just bought a small rectangle to go behind where the mirrors hang above the sinks. It’s colorful and fun and looks great – just the right detail for a main hall, guest bathroom. The wallpaper is from the same company as the wallpaper I hung in the half bathroom on the main level; which means it’s thick paper, that’s hard to manipulate and bend.  But, in this bathroom is was easier since I was just doing a flat rectangle – no corners or turns, and no cuts for windows or doors. What was harder though, was making all those dots line up. The dots are in a grid pattern – so I had to make sure the rows and columns were straight.  It required a level, a decent amount of maneuvering, and a lot of patience, again. And, wouldn’t you know it, the walls and ceiling aren’t straight. So, while it hit directly in the corner at the top of the wall, there was just under an inch of white wall space between the wallpaper and corner by the time you got to the bottom of the wall. But, I worked my way across and it came out beautifully. We love it! 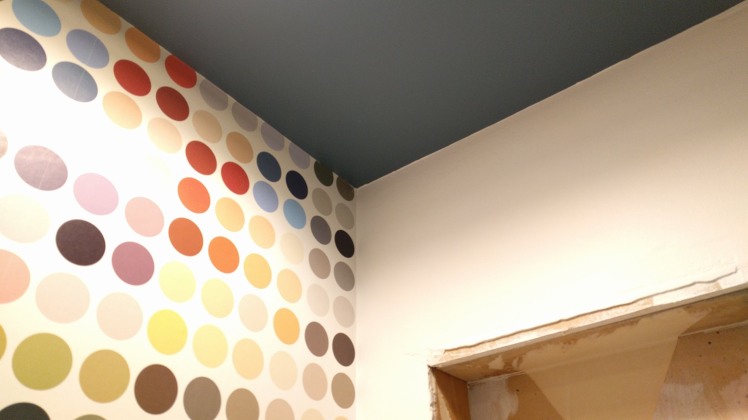 I wasn’t interested in putting trim up around the wallpaper – I didn’t want it to look framed. Yet, the house had different ideas. And, since the wallpaper didn’t line up just right because the walls are crooked, I went in search of some trim that I could frame the wallpaper with. I found some really cute dot trim. It matches so well, and looks as good as any trim would have looked in there.

There was an old medicine cabinet in the wall to the right of the sinks. I toyed around with putting a new one back in there or just framing out open shelving. I decided to just build the built-in shelf area. So, I used the same trim to frame the built-in and installed a single shelf in that area. (And, in the process, tried to just attach the shelf to the back wall – mistake.  Those anchors went straight through to the hallway because I was just working with ½” drywall at that point. Duh. Where was my brain? … Just wouldn’t be a completed project unless I made more work for myself, completely unrelated to the project I’m actually working on. (And in a hallway that we just paid to have painted!?!?))

I also used the same wallpaper liner to line the shelf.  It’s not perfect, that’s for sure … but it’ll do. And, it smoothed out the drywall/wood edges, which is all I was hoping for since I didn’t want to actually build a new shelf to fit inside the existing hole. 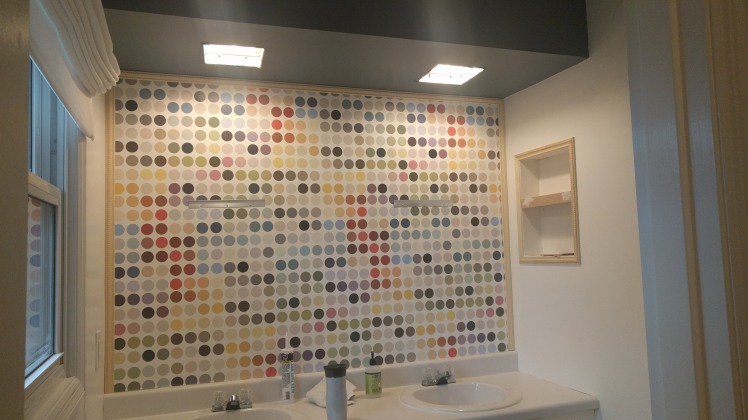 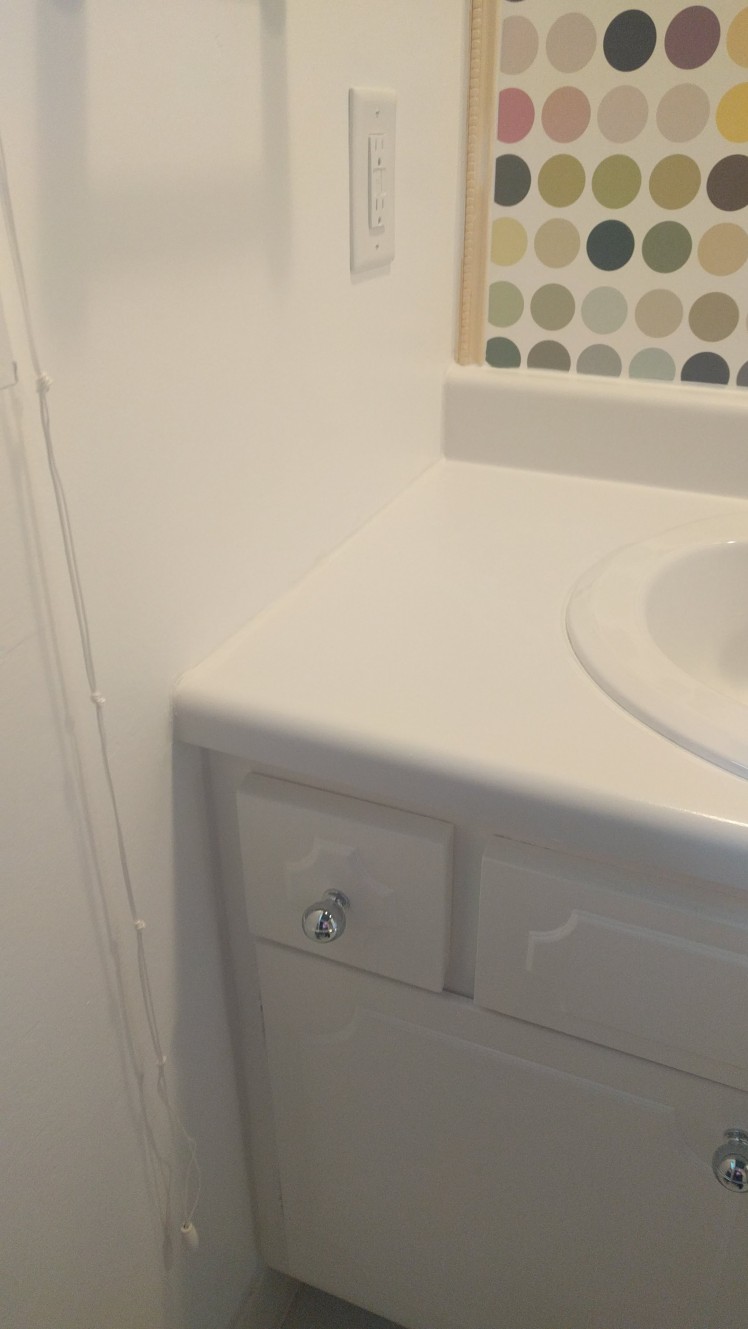 The square can lights were a conundrum. I wanted to replace them with some cute flush mount ceiling lights – but since the soffit hangs down there, the lights would have to be super low-profile. I couldn’t find any that I liked enough to spend the money requested by the stores … so we settle for new can covers, which I did have to find and order online, because, again, these are probably original to the house? I’m happy with them though, and they were super easy to replace and check off my list.

I also used one of our extra roman shades as a window covering in there – score!  It works perfectly and looks good. (It is a bit too long, because the windows downstairs are a bit taller than the one in that bathroom, but it does the job – and since it’s not in the shower area and it’s on the second floor, with no house behind us, it will likely rarely be lowered much anyway.) 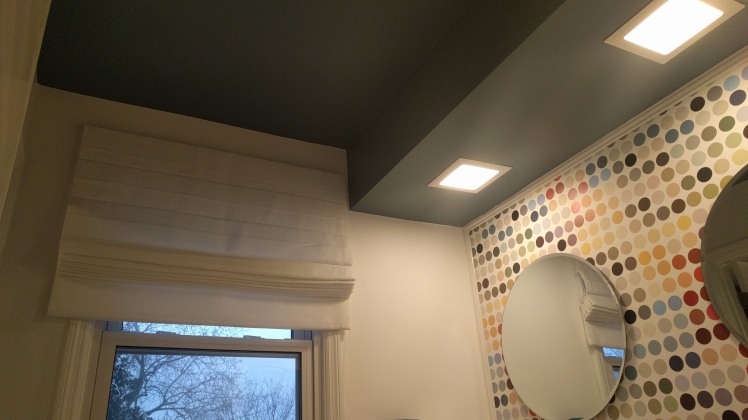 The shower curtain is from our Dayton guest bathroom, and the rugs are new.

The toilet paper holder is new … and was WAY more complicated to install than it should have been. (There was a stud next to the previous built-in holder, which was in the way of how this holder should have been installed – the new one was slightly bigger than the old one. Complicated enough, that I initially tried to work with it a while back in the spring and gave up; so it sat there with masking tape over the hole for approximately 6 months before I succeeded at installing this new one, which had been sitting on the kitchen counter for 8 months.)

The towel bars next to the sinks are also new, and the mirrors are new for the bathroom, but purchased way back when. The mirrors were stressful to install, because, like the half bath on the main level – I only got one chance at drilling these holes in the wallpaper. The only fix would have been to order a whole new rectangle of wallpaper – there is no repeats or “extra” to fill in the messes. (And the first try didn’t go well – the anchors were too flimsy. So I just went to our stash and pulled out some heftier drywall anchors and went right back into the smaller holes I just drilled. It worked beautifully – and only 1 set of holes per mirror now. 😊)

I’m 100% sure I haven’t included all of the issues and dilemmas and just stuff that happened during this renovation … but these are all the details I can remember. Maybe if something comes to me, I’ll post an edit … but for now, I think that this was just more than enough to document this room.

Just one last list to note … the unfinished items:

That’s it.  It’s finished. I might find some art or buy a full mirror to hang in there behind the door … but those are down the line, if I find one, maybe someday things. The real work is finished! And here are the pics to prove it. Yay! 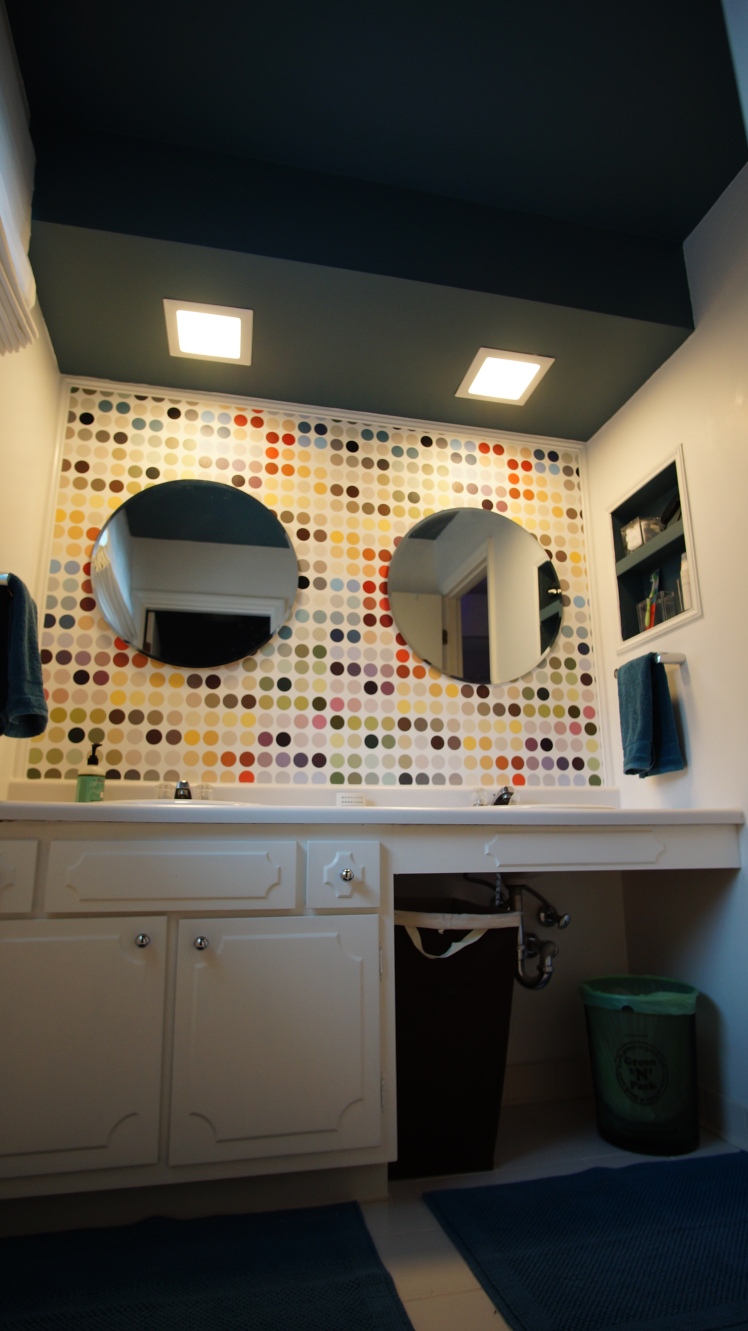 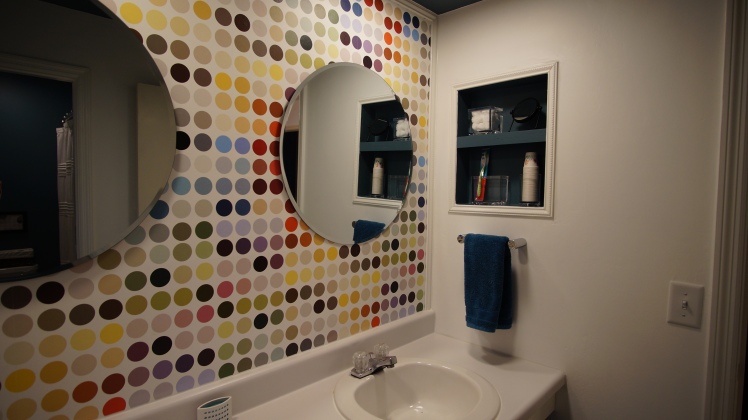 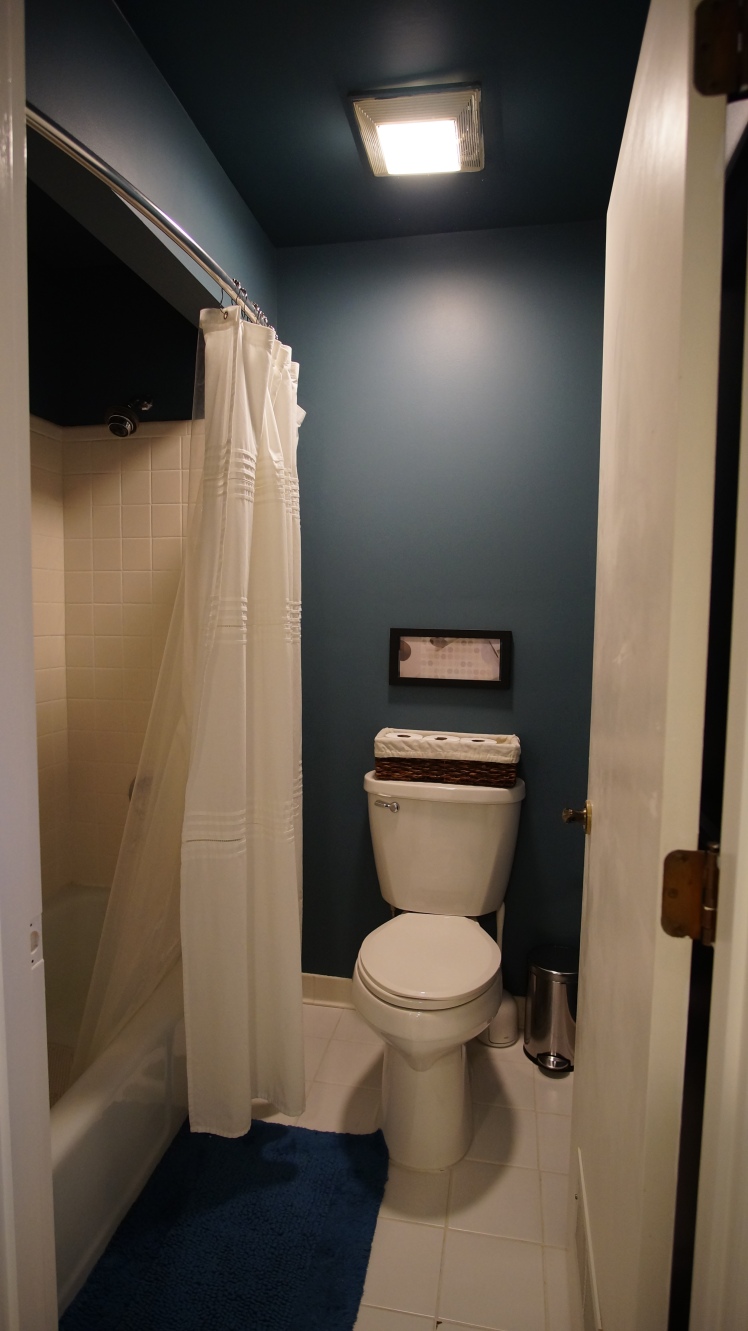 Also, you can click through this slideshow for the before & after shots … or scroll lower and see the side-by-side shots. 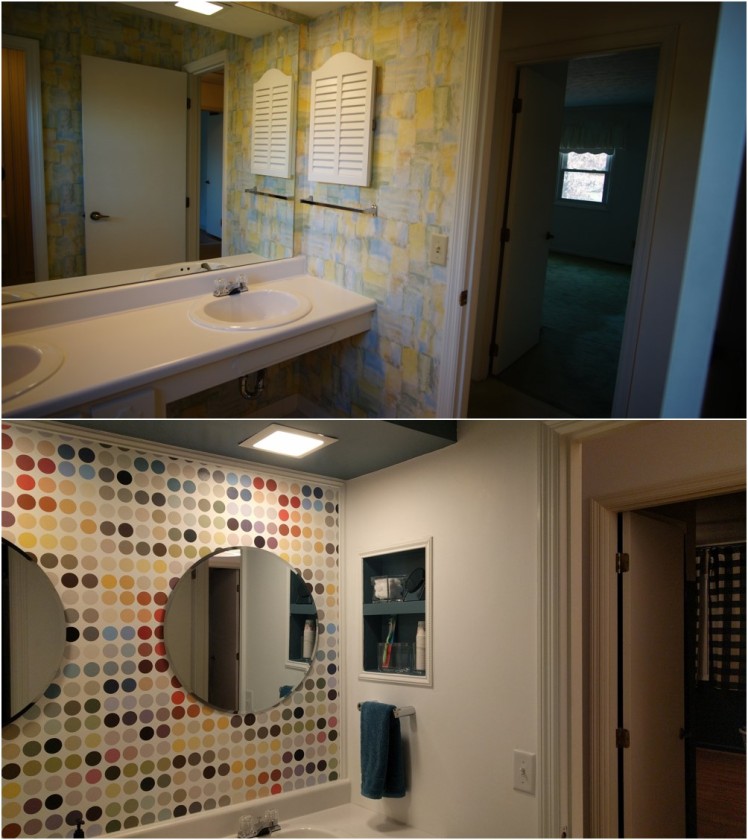