We’ve had 2 different painters come out to the house to quote us some work.  The first lady came back in September when we were still fixing stuff up and not living there.  She said she would mail us the quote the following week because she didn’t use computers well.  Never got the quote in the mail.  We called her.  No response.

The second guy came recommended from someone we knew.  I met with him, and he hung around for over an hour looking at stuff and talking about fixing up our house with me.  That was on a Thursday.  No quote the following week.  I called him 1 week later and left a message.  No response.  Called him again the following Monday.  No response.  Too bad too, because he seemed like he knew what he was doing.

So, anyway, I find it weird that we had 2 separate painters out, and both of them spent some time at our house, and neither of them even quoted us the job?  Why spend an hour plus talking with someone if you aren’t even going to quote the job, or aren’t even interested in it?  It’s beyond my reasoning.  I would have just left.

But, last weekend, we had a THIRD painter come out to quote us on some things … and he stayed put in our house until we had the quote.  We originally had wanted the guest bedroom, back hallway, trim, and kitchen all quoted and painted by a professional.  But, now we’re down to just the kitchen – and just the cabinets in the kitchen.  We just don’t have the time to do it – if we want it done in a reasonable amount of time anyway.  The cabinets need sanding, priming, painting, glossing; and that’s the doors, shelves, inside and outside of the cabinets.  That’s a lot of work.  I’ve been reading up on it and people say that it takes a good week of straight work to get that all done.  I don’t have a week of vacation to do that – and I figure that if I do it piece by piece, that week turns into a month. AND, knowing my track record, that month will turn into I still don’t have it done by August this year … and the first ones look really good and the last ones look noticeably shittier!  Which is why we are just going to hire it out.  Which also bums me out, because I wanted to do it (mostly, kind-of).  There is something to be said for finally finishing some hard work and being able to say – I did that.

But, I guess there is still PLENTY left to do, that I’ll be able to say that about … painting the hallway, bedroom, trim, kitchen, hanging tile back-splash, installing new light fixtures, painting and hanging shutters, hanging blinds and curtains, painting the front porch, replacing the outside railing on the front porch and back stairway, re-landscaping our yard, and more.

Some pics of a few more things that we’ve gotten set-up finally (mostly decorative, so I find it easier to want to do it!) ….

Added new door knobs to our bathroom, with a matching finish to the rest of the knobs in the front of our house.
Goodbye ugly, gold, out-of-place knobs.

Decorated the main bathroom
(even Pat likes the purple now … even though he said he’d help repaint when I decided I hated it when I told him what color I wanted to put in there!) 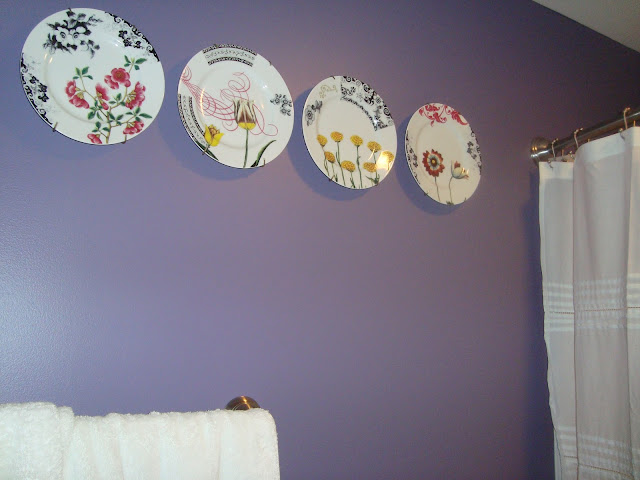 Picked a paint for the back hallway, and started spackling the walls:

Got a rug for under Pat’s chair – I was done with the folded up quilt we stuck under there and his chair sliding all over the place!

I’m going to try to get this all done by the end of next weekend (Goal = 3/13).  That is pretty aggressive, but hopefully it’s doable!

This weekend however, we are heading up north to visit some friends and have fun!