Originally there were 3 phases to this project:

We’ve broken this out into 4 phases. Mostly due to time and carrying costs (& pain-in-the-ass) of owning 2 houses.  Plus, we don’t want to count our chickens before they hatch (or basically, what if we spend all of the profit from the current house before we actually know how much profit we are going to make … that would be bad!).

So the new 4 phase plan is:

#3 & #4 could be switched – our main goal is to have time to enjoy the outdoor space, but also to have a finished basement before football season starts. We’ll see how that goes.  Plus, we want to be sure we’re completing the projects with a long-term like-ness in mind … that we don’t rush and wish we would have done things differently.  (However, we’ve both been wanting a finished basement and outdoor space for so long, we pretty much know what we want … it’s more of a what can we fit in the budget type predicament.)

So, now that we know what we’re hiring out and what we’re completing ourselves, we can share with you our big plans for the interior space!

Patrick got all the carpet & padding out.  We have a layer of particle board underneath all of the carpet and vinyl that all needs to come out.  We tried to demo that ourselves … we’re going to pay the guys to demo it instead.

Also, they had valances on EVERY window.  We are getting rid of those too.  (And they paid a lot of money for them.  We know because they gave us ALL of the receipts for EVERYTHING to this house.  Which is great, but I still don’t want the valances.)

We had contractors start last week. Drywall guys came in to scrape, mud, and re-finish (or un-finish) the stamped ceilings.  This was really high on our priority list.  And, doing it with nothing in the house and before new floors went in seemed like the most ideal time to get it done if we were ever going to do it.  But, honestly, when the first quotes started rolling in … we weren’t sure it was something that could fit in the budget at all.  So, then we asked to separate the main floor from the bedrooms and figured we could at least do that half.  It was still really expensive.  I tried doing it, and it was pretty easy and straightforward, but it would have taken me forever … seriously, we don’t want to carry these 2 houses forever.  Not ideal.  Then came a big break.  A recommendation from a contractor/friend … who had a drywall guy that needed about a week’s worth of work while his boss was on vacation … and we got ourselves a respectable quote for the whole house in 8 days of service.

Oh. My. Gosh. You can’t even image how much better the rooms look already – even with all the drywall dust and particle board flooring.  It’s amazing.  And money totally well spent.  (I think people underestimate the DRASTIC change and feel of going to flat ceilings.  Well, that and it’s not cheap or inexpensive.) 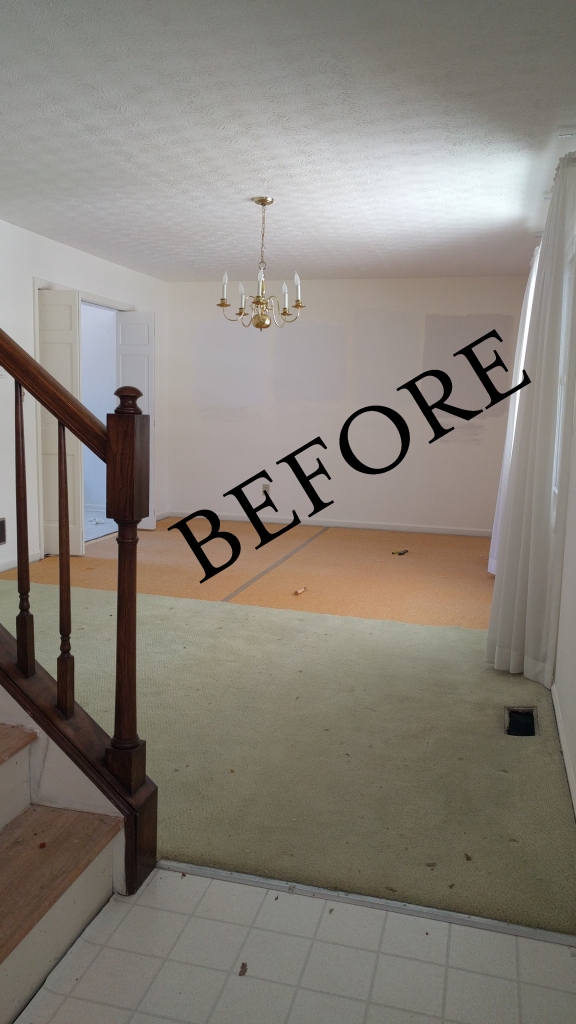 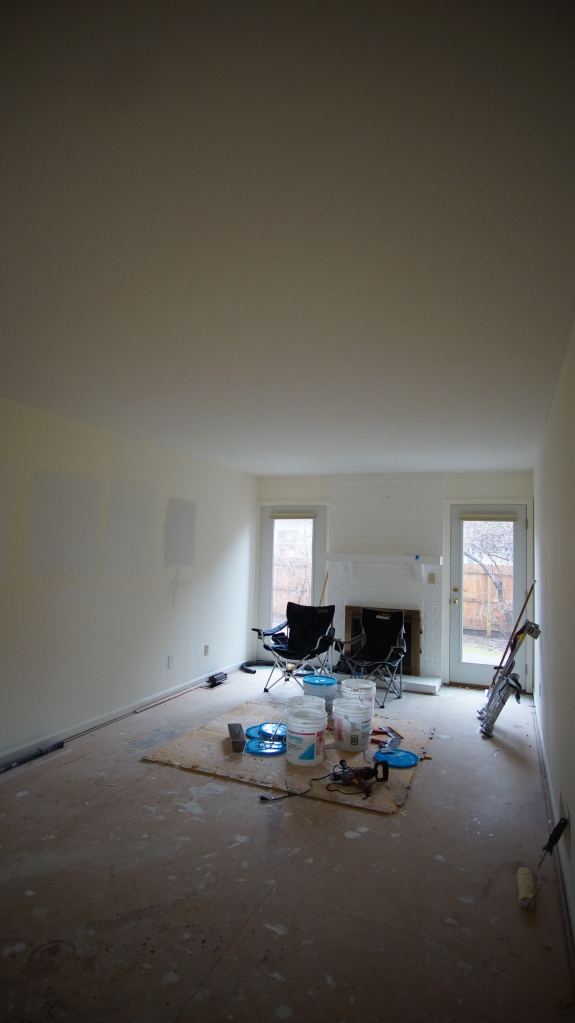 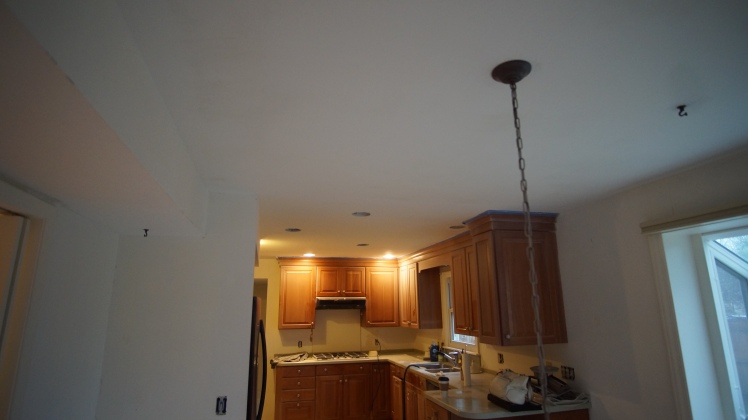 Side note – it is also SO messy.  I mean, like no other mess we’ve ever made renovating any part of any house.  It. Is. So. Messy.  (As shown in the pictures, we should have probably prepped better for it … but at least it was the first thing done, so we can clean up and move on … to wallpaper & glue bits everywhere, more drywall dust, and sawdust … I think cleaning might take me a full week just before we actually move in!) 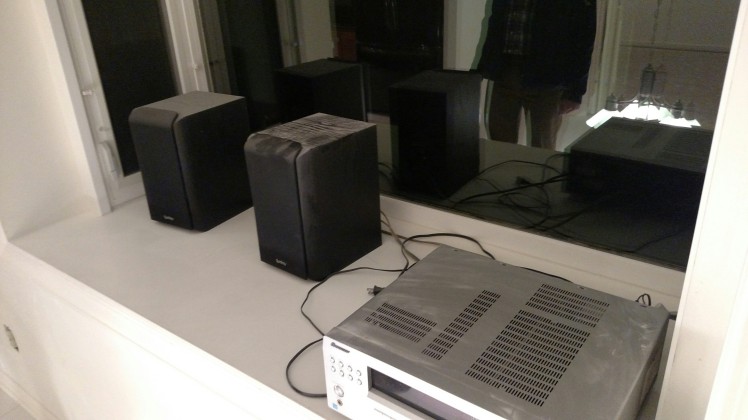 In the stairwell, there was wallpaper that wasn’t going to match so well with my design scheme … so we knew it had to come down and that the walls would be a mess afterwards … and that we’d need help. The same drywall contractor is also helping us out with removing wallpaper and mudding the walls in preparation to paint there.  This isn’t work we’d normally contract out, but I didn’t know how handy I’d be up on a ladder, peeling and fixing the walls so high in that area.

We are adding a doorway between the kitchen/hallway/½ bath area and family room. It’s weird to explain, and pictures don’t do it justice … but they used to have a doorway there and then they closed it in.  We’re not sure why because the flow of the house is ridiculous without it.  I mean, if you’re in the family room and have to use the bathroom or want a drink, you have to walk out through the foyer, around the closet and into the kitchen or bathroom … even though it’s literally right on the other side of the wall!  Plus, as of now, the only access to the outdoor space & patio is through a door in the family room.  So, grilling is out …[unless you want to walk through the entire house with a plate full of raw chicken, or on the flip side, the chicken would be cold by the time you walked to the kitchen table with it].  Also, enjoying drinks outside and you have to use the bathroom, or need a refreshment … we’ll see you in 20 minutes … because you’re going to have to walk around the entire inside of our house to get to the bathroom or kitchen.  It actually might be faster to use the upstairs bathroom.  For real.  (I mean, I’m slightly exaggerating. The house is only 2100 sq ft … but it feels like a mansion to us since we’re coming from 1200 … and stairs?  Whoa.)

Anyway, you get the point. The doorway = a must project for us.  Back to adding the door.  We’re going to do it.  It’s scheduled for this/next week.

We’re also widening the walkway between the kitchen eating area and the living room. Right now it’s 5 feet wide; we’re adding 1 foot on either side.  It’ll open the flow up between the rooms and make it feel bigger and flowier (not a word).  Plus, after phase #4 is completed, when we add outdoor space off of the kitchen, it’ll make that whole side of the house easier, more fun, and better flow overall. (I think that I can probably fit the word flow into this post at least a handful more times.) 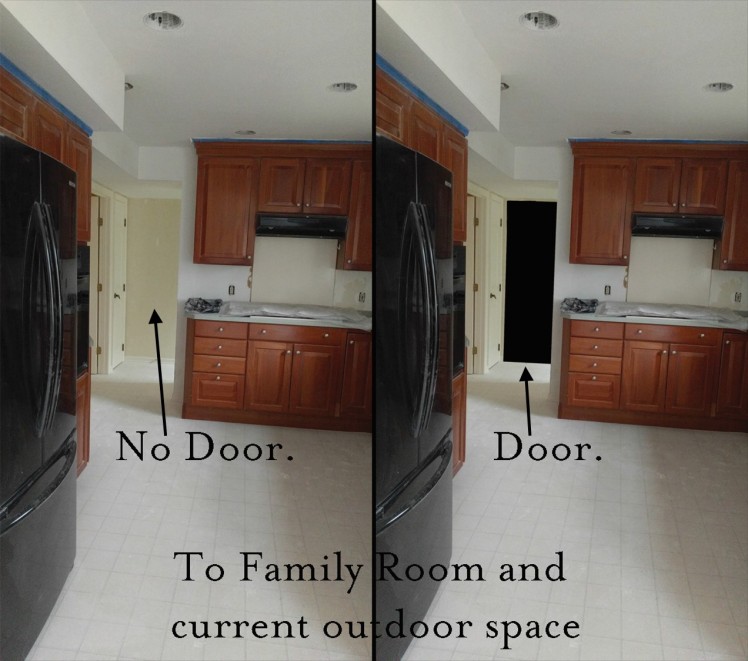 Also, we’ve gotten down almost all of the wallpaper. Only the upstairs main bathroom remains unfinished.  It’s started, but unfinished for several reasons.

I mean, so much glue. I’ve removed and hung my fair share of wallpaper in my lifetime.  I’ve never seen or felt so much glue.  It was measurable – truth.

So I get to do the bathroom twice. No choice.

Thankfully, glue is water (& soap) soluble. So, cleaning up after I finally finish getting all of the paper down won’t be too bad (fingers crossed).

Also, we found some pretty sweet additional wallpaper behind the mirror. I can’t decide which one is better/worse?  Also left the wall a mess … but we’re putting the mirror back up there, so we’ll fix it best we can and cover it up again. 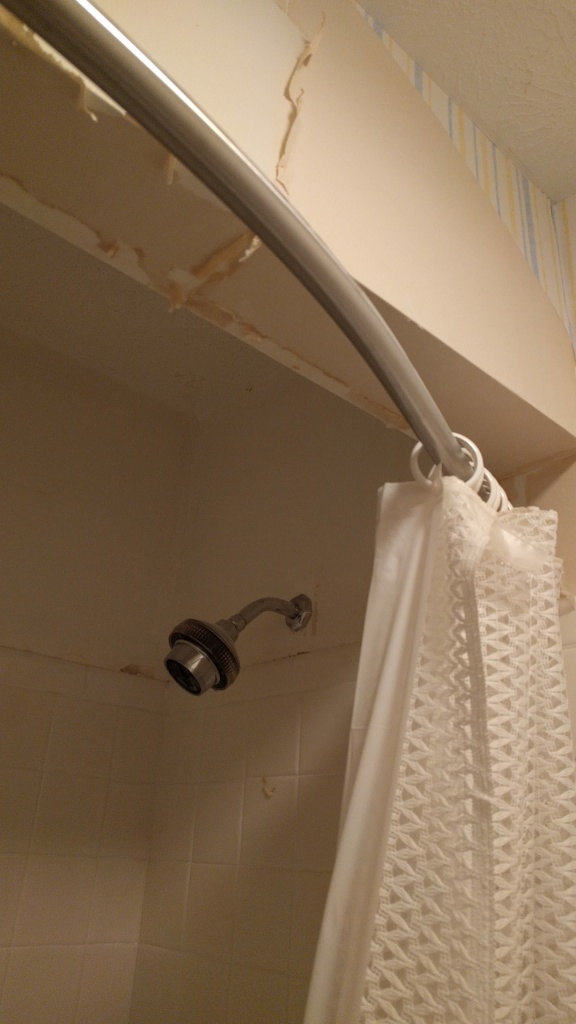 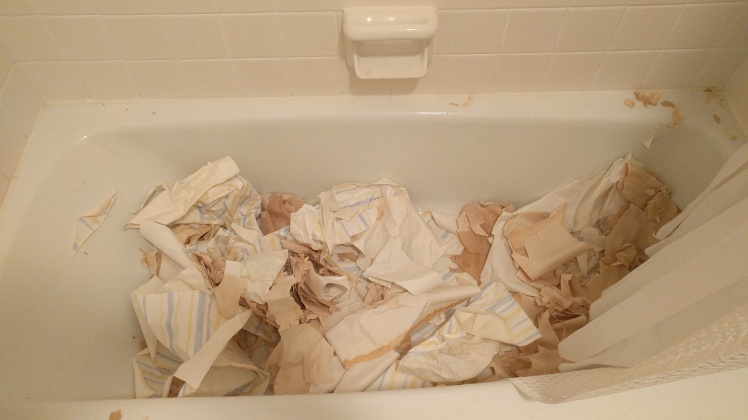 We got a dumpster. It’s where we’re putting all of the carpet, padding, particle board, toilets, bath vanity, etc.

{No picture, because I forgot … but you’ve seen a dumpster before.  Ours looks just like that.}

Also, we have deer friends, again. Lots of them.  And they are definitely used to people.  These ones didn’t even run until I was walking up to the front door and probably 20 feet away from them.  (I wasn’t scared though because they are deer.)  (And, none of them were fawns, bucks, or had antlers.) 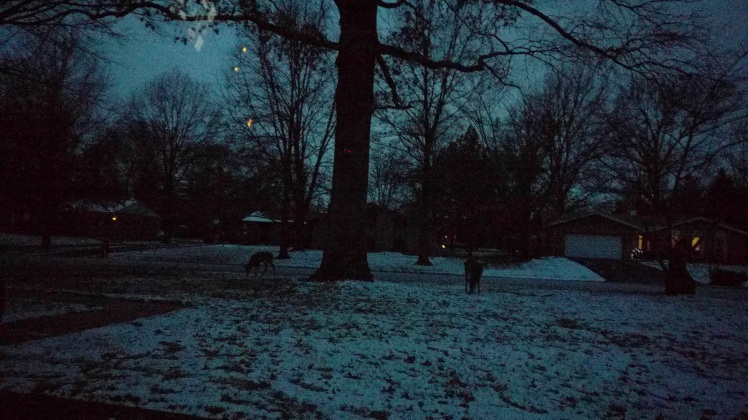