Just a quick update on the basement progress … which, for the time being is the only renovation going on in our house.

The crew finished the framing and roughing in the plumbing and electrical (previous post, Part 1).

Patrick & I spent a night installing speaker wires, HDMI cable, ethernet, etc … so that all of his projector set-up wires can be hidden behind the drywall. – Back at the other house, we used the paintable covers, and those worked really well, but since we had the opportunity to legitimately hide the wiring, that is obviously the more desirable option. Plus, bonus, it didn’t take nearly as long, nor was it nearly as painful of a process, as either of us were anticipating.

Then, they started insulating – everything! We had them add insulation to the ceiling as well, in hopes that it cuts down some on the noise transfer to the upstairs.

After insulation came drywall. And our house was covered in another thin layer of drywall. I have lost count of how often I have cleaned up drywall messes in this house. And they aren’t finished either (& neither are we, with drywall projects that is). The crew hangs all of the drywall, but Dan has a contractor who does the seaming and finishing. So, while the first (lesser) mess is cleaned up … the finer, messier work is still to come. 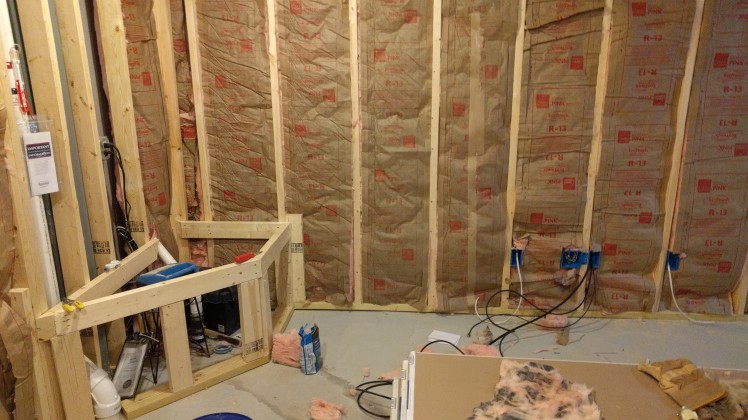 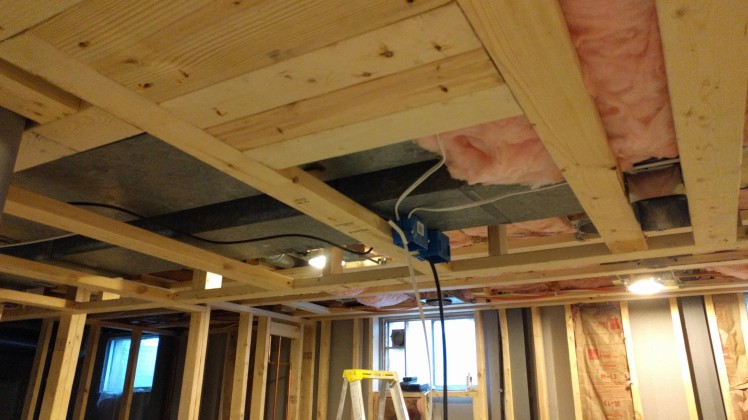 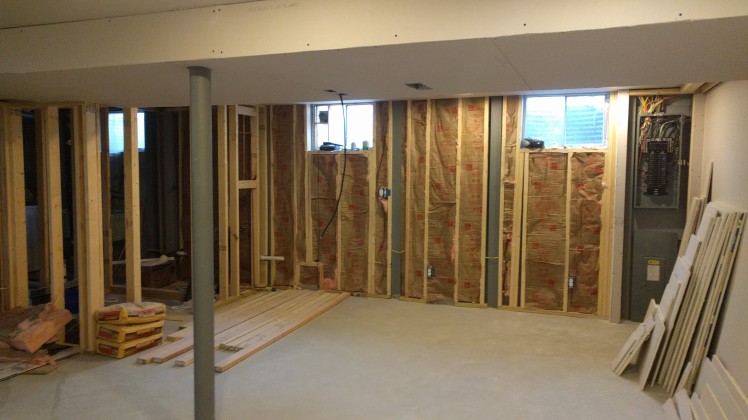 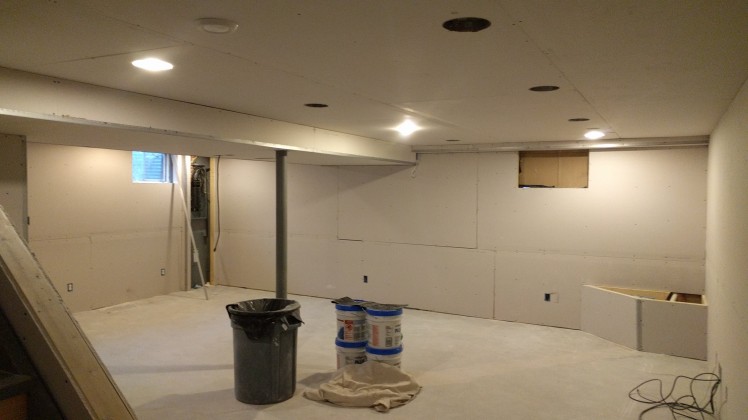 Also, after those guys were finished hanging drywall, I scraped the stairwell ceiling.  It was the last place in our house that still had the original stamped ceiling hanging around. We all (us + contractor) just missed it when we originally scraped & mudded the rest of the house … and we’ve just lived with it since, because it just didn’t really matter. But, Dan said that if I could finish it before his guy came to mud the rest of the drywall, he’d likely smooth it out and fix any sort of blemishes.

So, I pulled out the wallpaper steamer, and went to work on the stairwell ceiling. We lucked out – it had never been painted, and I could stand on the stairs and reach everything. Steaming the stamped pattern might not have been the best way to remove the stamping, but I knew it worked well from accidentally scraping some off while removing wallpaper in the bathroom, kitchen, foyer … all those places that had wallpaper when we bought the house. And, since it was such a small space and I wanted it finished quickly, I went ahead and used that method. [I might not suggest using that same method on an entire room?] But, it only took about 2 hours from start to finish; and it scraped off pretty easily. Yay! It also created a huge drywall mess – because everything that scrapes off it basically just glue. Boo. But since there’s no flooring installing in the basement, and the stairs aren’t finished yet, and everything is basically still a construction zone down there, I was able to just sweep it all down the stairs and easily scoop it up into the trash can. Easiest drywall mess I’ve cleaned up yet!

So, now we’re waiting on the drywall finisher for these next steps … and he does Dan’s work on the side – so evenings & weekends. And, he’s good, so we’re willing to be flexible, but I’m not going to lie – it isn’t always fun having contractors in your house around the clock … weekends are typically a nice break … but it’s how this one is going.

And, on a final note – Dan has been on vacation for over a week now. We knew that going into this process. One of the first things he had to do, so that they could frame the finished area and bathroom in, was to unhook the laundry machines and sink and move them out of the way. And, since he had to finish roughing everything in, so that his guys could do the insulation and drywall while he was on vacation, he ran out of time to hook up the laundry in its new location.

He’s back in town this weekend. Expectantly back to working in our house on Monday. And, hopefully, hooking up the new laundry area is his first priority.

It’s been 3 full weeks. We haven’t been to the laundromat yet. We’re getting by. [I think that this might be the most laundry I’ve ever had pile up, ever.] And by Monday, it’s going to be a problem. I’ll keep you all posted.