It’s the last post before I show you guys the renovated space … and it’s going to be a (kind-of) quick post.

We’ve been working on finishing the space for weeks now.

We had a really great contractor … until he wasn’t.

We’re not sure exactly what happened. Everything was coming along just fine, very slowly, but good.

The GC had a couple of vacations, his drywall guy took a while to fit us into his schedule, then he was juggling our reno with the start of other projects, and things started to decline towards the end.

The first vacation we knew about, and his crew worked though it as much as they could.

The drywall guy took weeks (literally, 2+ weeks; he had some personal stuff going on, and does drywall on the side for our GC). This was less than ideal, but we wanted the basement done right and really liked our GC, so we just rolled with it.

But, by then our job was dragging on … much longer than any of us anticipated, and they all had other stuff in the works – new projects, more vacations, life – it all just happens.

Finally, the crew installed the floor, and bathroom fixtures, and kitchenette.

Except, there were all sorts of little details that no one paid attention to, except us, I guess.

Then they installed all the trim work, and that went well.

And, then, well, they said they were finished.

It did not look finished down there.

But, by this time, our GC had kind of checked out. Quite a few things had happened, so we’re unsure of exactly why … but we have a few guesses.

For starters, it was taking WAY longer than he anticipated (all on him and his crew and his drywaller, but still, much longer). His wife had been sick. His back was strung out – like, he was wearing a brace and not allowed to drive strung out. He had moved on to other jobs already, other projects were already started. And, I’m sure his schedule was getting backed up. Also, the weather was turning, which means it was deck building season … which is preferable to him and his crew.

None of these are valid reasons … they’re just excuses … we paid him for a job, were super lenient and undemanding of his time when they just didn’t show up for a week sometimes, and overall pleasant to work with … but what were we going to do?

So, Patrick called our GC and felt out the situation.

The GC said the trim finishing and caulking was done by the painters, and since we said we’d opted to do that ourselves, his crew doesn’t finish it. (Would have been nice to know – I would have paid his painting price if I had known it included all of the finishing work too …)

But, he did agree to come back and install a 3-way switch for the stairwell and the shower door. (which was required due to the way HE installed the shower floor … also not noted at the forefront of the project.)

And, after that answer, Patrick decided that it wasn’t worth trying to get him to finish the other stuff. We didn’t want to make the situation worse. – Maybe they’d just glue a shitty trim piece around the pole to cover up the floor? Then, we’d have a harder time fixing that on the backend than if we just trim it out ourselves. And so on, and so on.

So, while disappointed because I just had a vision that I was paying these guys to basically execute, and that when they were gone, we’d be left to only have to move our stuff down there and enjoy … it hasn’t worked out that way. At all. Not even close.

The crew was last in our house on Wednesday, March 21 (ish … might have been Tuesday or Friday that week?).

The GC came back the following weekend to finish some electrical and plumbing.

Then, the GC and a helper came back on Saturday, April 7 to install the shower door and kitchenette sink. They didn’t quite finish, so the GC had to come back on Monday, April 9 to actually finish.

Except, it isn’t what I would have called finished.

So, for the last several weeks, almost non-stop, I’ve been working in the basement to legitimately finish the space.

I had to paint. A lot. There were tons of problems with the cheap framing and paint sticking (which required oil based paint, in a basement, not ideal). There were creative solutions to finishing touches. There were sticking hinges and drawers. There was more dust and dirt. A large hole in the wall from running some new electrical. And on and on and on.

But, this past weekend, we set up all of the theatre equipment – mounted the projector, hung the screen, moved all of the electronics and speakers. Plus, the new seating and the new fridge were delivered (because the old one was defective and a HUGE hassle on its own).

There’s literally only a few things left on the list, and then it’ll be actually finished.

But, it’s been a crazy, exhausting, frustrating past month. [And I may or may not have thrown a little tantrum, crying in the middle of Lowes, declaring that I was NEVER EVER going to renovate another house. (That’s probably not true … but if you’ve done this, you get it.)]

I guess we were super spoiled by our super, amazing contractor at our last house. He literally installed everything down to the matching floor vent, and made sure all of the screws lined up and everything was sparkling clean before he left. He wanted his work to look amazing – and it totally did. We haven’t found a contractor as competent or as detailed-oriented since his crew. I’m starting to doubt we’ll ever find one again? And that makes me sad.

Nonetheless, the basement reveal is almost upon us … hopefully, I’ll get to the finishing touches in the upcoming week. Then, I’m sure it’ll take me another week to sit down and post it all up here (blogging is work, y’all!).

Until then, enjoy the pictures of the unfinished touches, courtesy of our contractors, fixed by the homeowners. 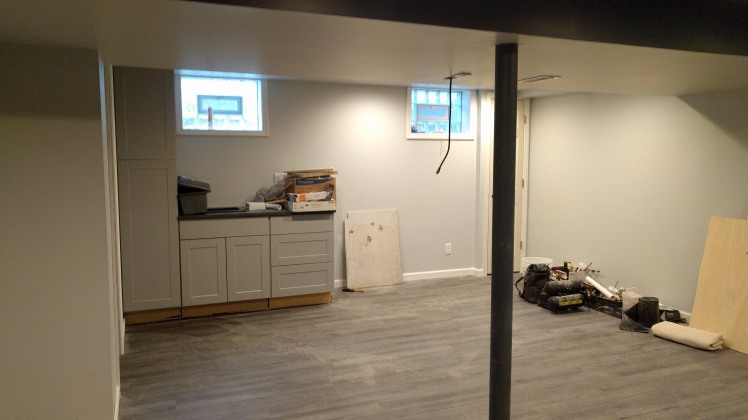 One thought on “The Basement … it’s almost finished.”