We had a SUPER weekend!  It was very productive, fun, exhausting, and rejuvenating all in one.  We haven’t had a weekend like this … well probably since we first bought this house.

SATURDAY
We had a sleep-in, lazy morning.  It was nice.

We are were both looking for new golf clubs, and our driving range/lesson club was having a Demo Day, so we headed over there after lunch.  Talked to a few people, hit a few clubs, and hung out for a bit.  I think I found a driver.

Then we headed up to the golf course … it was later in the afternoon, 3pm tee time, with perfect weather!  I mean gorgeous!  There was barely anyone left at the course – just how I like to play … all the time in the world to focus, mis-hit, and just have fun.  It was a blast – other than the sub par conditions due to the monsoon, the fact that the course was waaaaaay hard (and super long), and the fact that I had a breakdown somewhere around hole 10 – but totally fun!  Followed by an American Idol dinner bet at Oakwood Club … drinks and food were on me (sorry you missed it!). 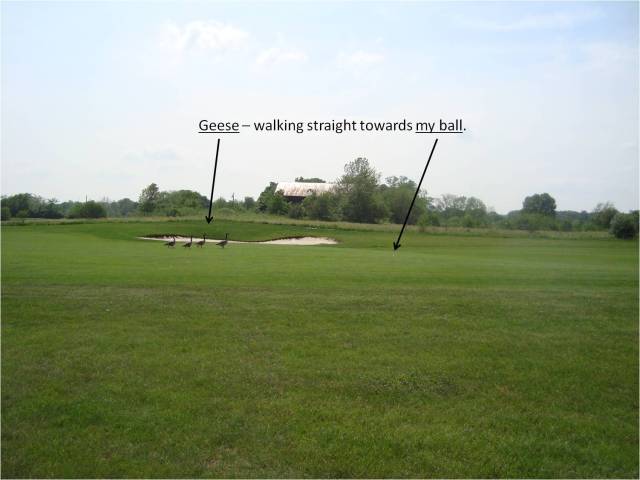 SUNDAY
So, we had made a deal that we’d do fun stuff on Saturday & Monday – and all the work on Sunday.  It was a good deal.  But, Sunday was hot.  90 degrees plus.  We meant to get up around 9am to start doing yard work, but that turned into 11ish since we went out for dinner and drinks Saturday after golf.  Then, we got some lunch, picked up our screen door with it’s new screen (it’s awesome, in case you were wondering!), and went back to start in on work. 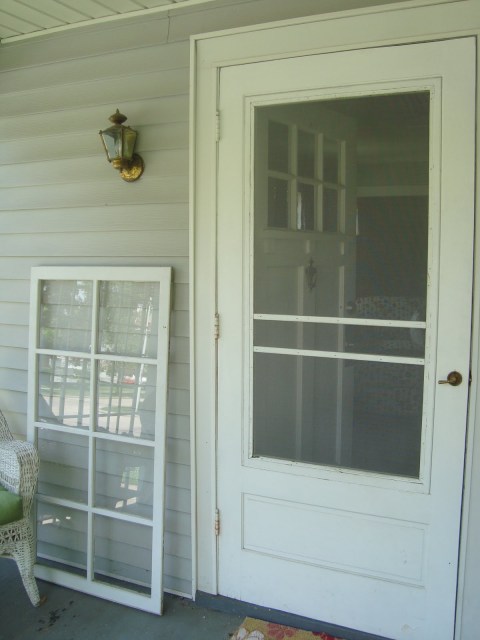 So, about 2pm, we actually headed outside to do work – me, start digging the front yard up; Pat – mow the lawn & then help with the demo.

Now I know why my mom always said she had to get the stuff done in the morning and she’d be finished by the time I was out of bed.

But we suffered through it.

And accomplished A LOT!  And, by a lot, I mean MASSIVE, WOWZER, CRAZY AMOUNT OF WORK.
(Especially when compared to the nada, zilch, nothing, never yard work that either of us had ever done before?)

Now, it’s only fair that I mention that we lucked out and bought this house next to a fabulous, terrific, couldn’t-be-more-generous, hard-working lady.  She loves yard work, totally wanted to help us, had all the right tools, and is super nice & knowledgeable to boot.  Pretty unbelievable, we both must say.  She helped us all afternoon, and into the evening on Saturday.  Just offered her help right up, and did an excellent job.

Now, it’s only fair that I also mention that she put us to complete shame.  She’s about 15+ years our senior, wore long pants and a long sleeved shirt, and was a mad woman when it came to doing the work.  She just kept chugging along – digging, clipping, axing, shovelling – calculated breaks, and didn’t slow down.  Me & Pat: shorts, t-shirt, water, interval breaks every 10 minutes, sweat pouring into our eyes so that we could barely see.  You get the picture.

Now, Rita & I were able to clean out most of the shrubs, bushes, ivy, weeds, roots, etc.  Except for the stump.  There was a stump – that was actually more like 100 stumps in one – and it stumped us (hahahaha).  It was a tree/bush that was many things in one – we’re not sure exactly what it was.  It had to go.  We cut it down and dug around it, but it was not budging.  We borrowed other tools from other neighbors, and to no avail – this stump went no where.  Boo.  So, this is what we ended with on Sunday.

Also, we *GOT* to witness an exchange between the mama and papa birds taking over the nest duties and sitting on the eggs.  So, Pat (very excitedly) snapped this picture while he could so we can all see the eggs!

Side note – I sprayed insecticide in that basket about 3 days to 1 week prior to the birds nesting in there … so I told Pat I hope the babies aren’t too dumb to leave when they hatch. (There’s already been some bird droppings on our front porch and I want them out.) 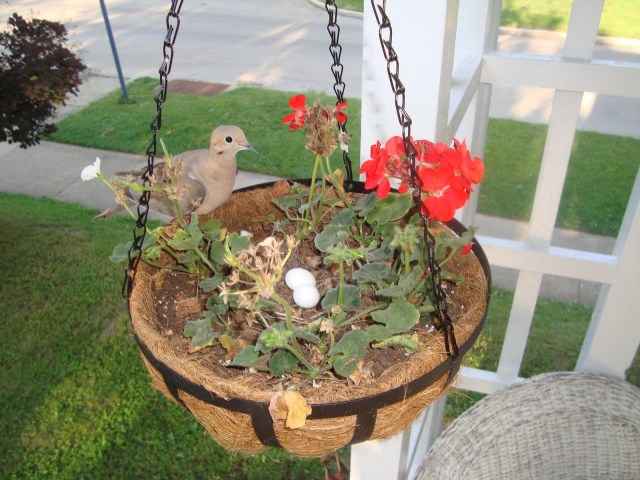 MONDAY
We took it easy during the day – it was even hotter than Sunday, and I wasn’t having any part of yard work at 95+ degrees.  So, we went to lunch, stopped at Golf Galaxy – bought Pat some irons (YAY!) – went to Home Depot, then home.  I took a little break, while Pat went to the driving range to swing his new clubs.

Then, I got to work cleaning up the outside.  We kept the hostas – but they were scattered around – and a rose bush we found buried behind crazy over-growth to see if we can use them. But the dirt wasn’t tilled, and the stump from the crazy-mega tree was still out there.  So, I figured we better at least clean up the work so it didn’t go to waste and sit there for another couple of weeks before we touched it.  Rita saw me out there and came out again to help!

So, we moved the plants, tilled the dirt, positioned stuff to clean it up, killed more roots, pulled more ivy, and sprayed a bunch of Round-up to kill anything that I couldn’t get to … I wanted to make sure that it’s all D.E.A.D.  Much to Pat’s dismay, I ended up spraying the ENTIRE yard with this stuff … I, like, had no idea it was totally toxic and would kill grass – I thought it was for weeds?  Opps, sorry sweetie.

That’s a lie – but he told me about 100 million times not to spray the lawn because it would kill the grass.  He reminded me it was toxic and to be very careful EVERY time I mentioned Round-up or weed-killer.  Plus, our grass is mostly clover, so really, I mean really, would it have mattered?

And, when Pat got home, he worked on that stump for another couple of hours.  He dug, axed, pried, wedged, and cursed at that thing.  And in the end it was all worth it – because he got it out of there.  It took us probably 4 cumulative hours to remove this stump. 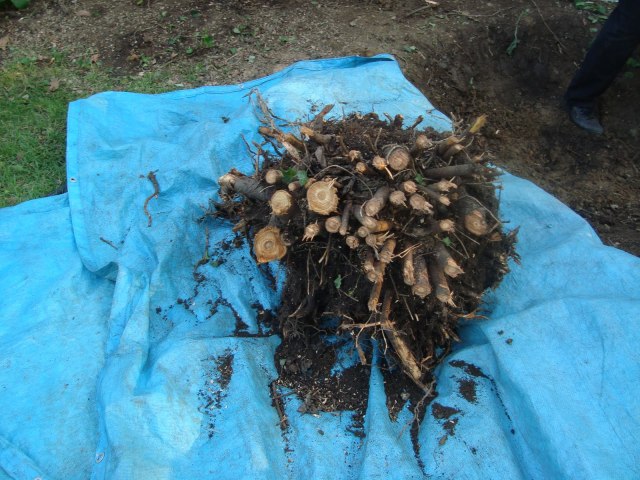 And, so, with all of Rita’s help, tools, and know-how … we fixed the front of our house. It no longer looks like a jungle, overgrown from the monsoon. You can see that we have a front window, siding, shutters, railings, a walkway!  It looks bigger, more open, cleaner, more kept-up … like non-crazy, non-wild Amazonians live here!  The finished (for-now) look.