We finished a project!  An entire project.  As in we’re done … with all labor associated with the project!

But, I degress, to fill you in on the beginning half of our July.  We had a very happy July 4th.  We had friends in from out of town, which was super nice (and not only because we didn’t have to travel).  We ate, played games, drank, and ate some more.  It was lazy and awesome. 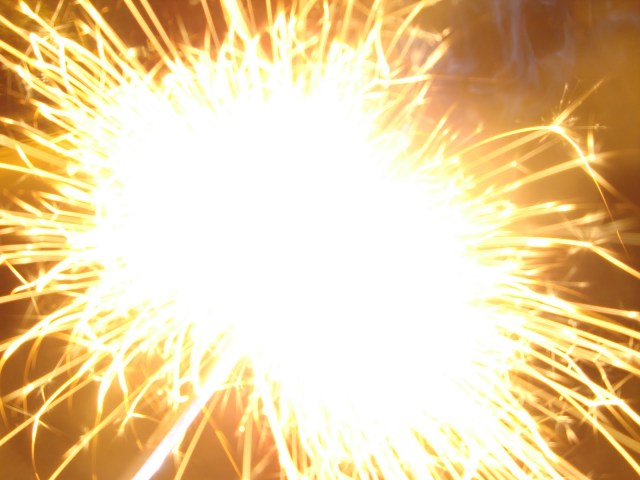 Pat & I saw fireworks on our actual Independence Day.  They were pretty freakin’ sweet – this suburb spends $50k on fireworks and sells corndogs and snow cones (and fried donuts) outside the stadium where they fire off the works.  The finale was like a giant sparkler in the sky.  I love fireworks, and sparklers, and the 4th of July.  I forgot my camera.

And here’s what’s new in the household:

We had the driveway re-sealed and partially re-paved.  When we bought the house, there was a list of things the city wanted fixed (or they kick us out).  We split it with the past owners, partially because (a) they weren’t going to do them; (b) if they did have to do them they would have half-assed them (obvious from past findings); and (c) we wanted to do them our way.  The driveway was one of these items.  It was in bad shape.  There were pits and holes; the cracks had at one time been filled (inproperly); the weeds/plants next to the driveway were growing over the blacktop; it was crumbling.  So, we hired a company to fix it – it was b.e.y.o.n.d. repair kits purchased at Home Depot.  They had to dig up a portion of the driveway and re-fill it.  They had to seal the rest of the driveway.  (We were unaware that the newly layed part of the driveway had to cure for a year before it can be sealed; but it does, and we know now.  We’re becoming very smart, and after this house-fix-up, we might know everything, you can ask us then.)  We now have a driveway about twice as big as it was before; and it looks black; and it’s smooth.  Feast your eyes on this: 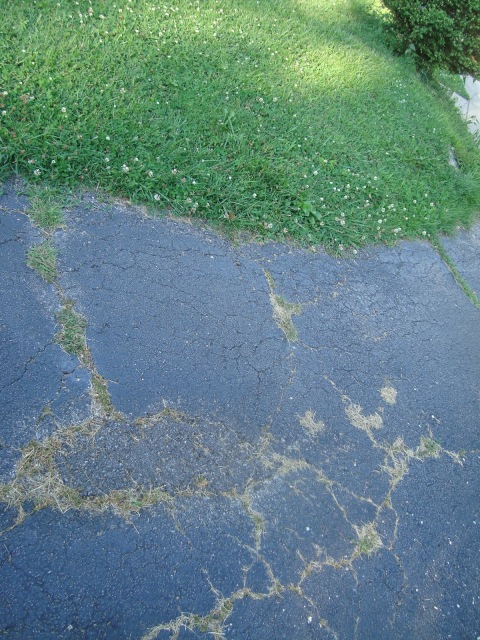 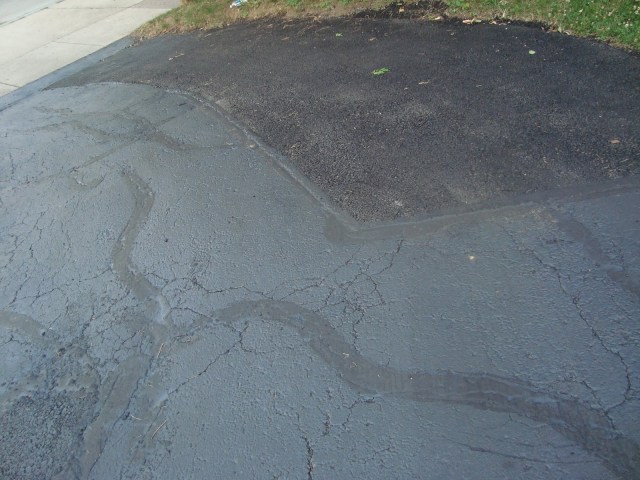 AND, if you turn Pat’s car into a WonkaMobile, you can see how much extra room we have on each side now! 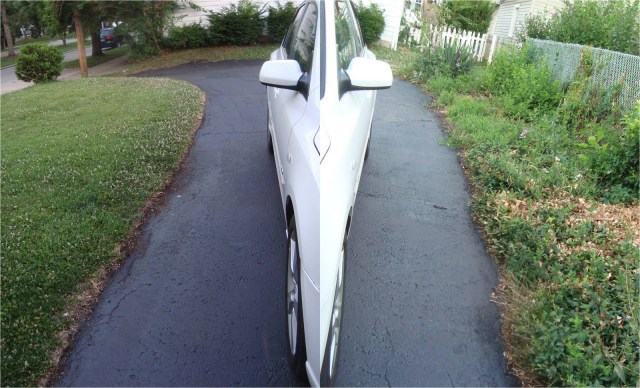 We finished the front yard!  Lilies, gardenia tree, top soil, black mulch, hostas, hydrenda bushes, rock borders, grass seed, and lots of sunlight and water = an awesome front yard!  We plan to plant some tulips in front of the lilies this fall, and maybe try to find some perenials that we can put up there too … that way, next year, we’ll have tulips in the spring, with a tree & bushes; and then lilies and *something else that comes up annually without me having to re-plant it* with the tree & hydrenga bushes blooming all summer.  We still think it’ll looks pretty sweet now though (and all the work later is just gravy … not necessary, so we count this as DONE). 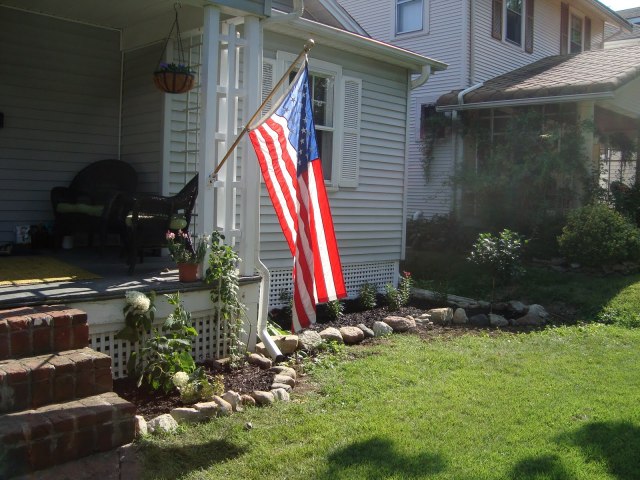 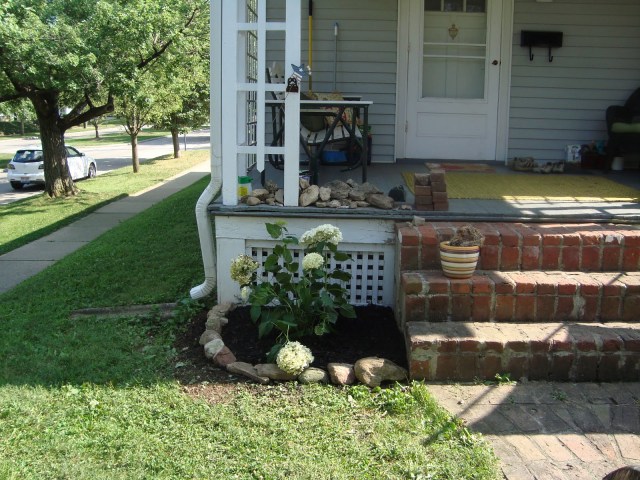 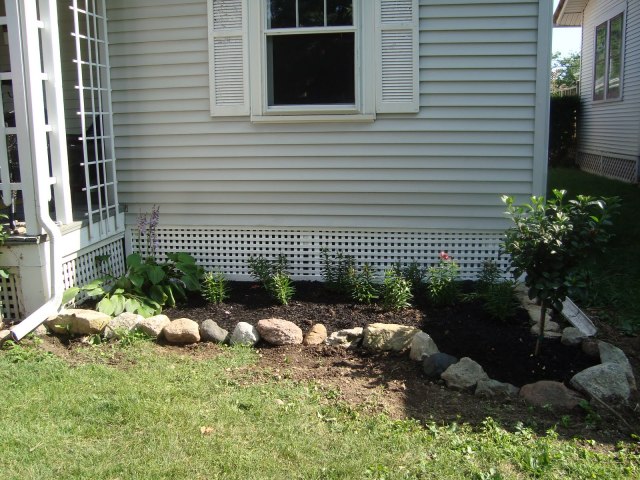 Also, we (Pat) have NEW bird friends.  This time it’s robins – and they are NOT in my hanging baskets impeeding on the front porch.  They set up camp in the Leaning Tree of Casa Sawyer in the front yard.  New problem – these robins are WAY more territorial than the doves were.  There are 3 eggs in the basket.  (Also, funny side note, we have bunnies in the back yard too … I think Pat might be the wildlife whisperer.  Or maybe our house just doesn’t look as scary as it did before?) 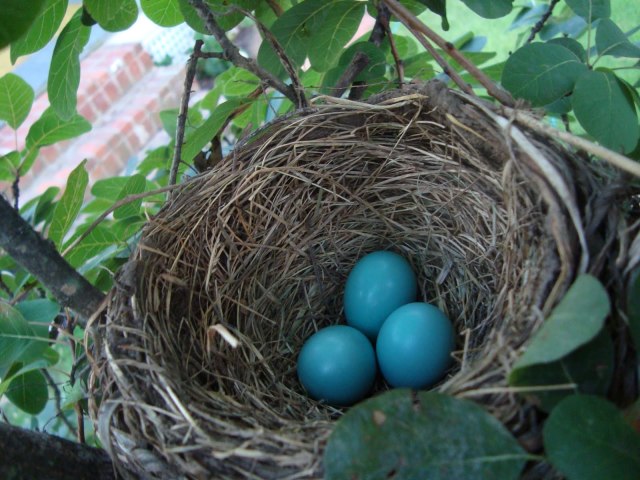 I also decided upon a look for the kitchen.  The walls are horrible; the paint samples just pealed right off due to the massive amount of wallpaper glue the previous owners used (at least they didn’t use gorilla glue, right?  there’s always a silver lining.); the crappy way the counters don’t seal up to the walls (or just the crappy counters. period.); the stupid tile glue left over from the horrible tiles behind the stove.  I could just keep going … but I will not.  I’m not going to tell you my idea, or post my inspiration picture just yet … I’ll just say that it is coming soon – and by that I mean that I hope to have the kitchen done by the end of July.  Minus the new refrigerator, stove, counters, tile backsplash, sink, faucet, and microwave – it’s a work in progress, okay?  So basically, I just hope that the painting/decorating-type things I am going to do are done; hold me over for a while until we can pay for those previously mentioned, lacking items.  I’ll keep you posted.

TILL NEXT TIME, FRIENDS!