(If you’re not caught up on our contractor incidents, read this. Also, there’s legit cussing in this post. Sorry moms.)

So, remember when I said we were meeting yet another contractor this last Saturday?  Well, we met with him.  We’re showing him around the house.  Asking him to quote some small handyman items, the master bathroom, and the basement work.  We’re in the basement, trying to turn lights.  None of them are working and we can’t figure out why.  Then we find this: 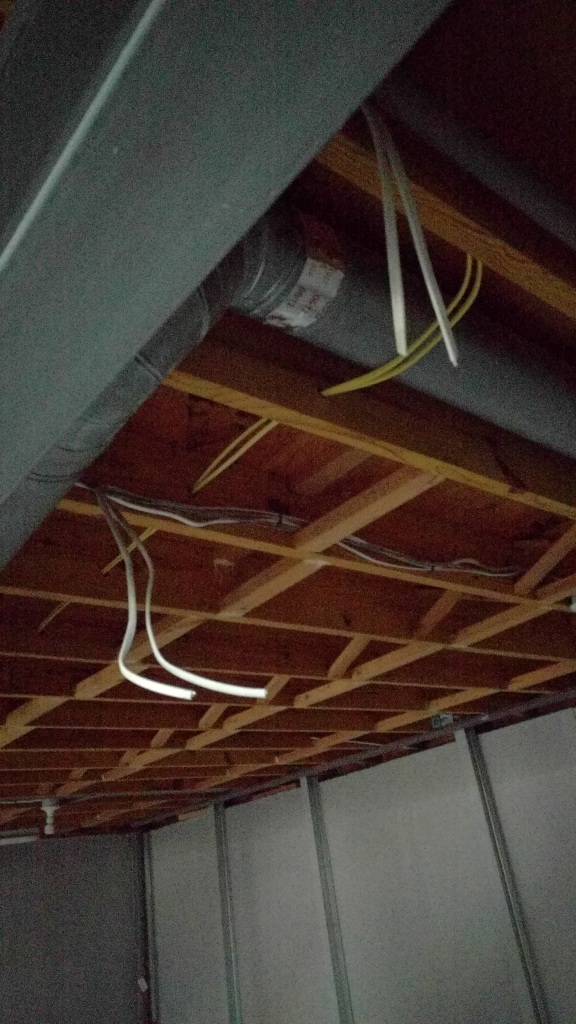 Yep. Those are live wires just hanging around in our basement.  Right where we paid them extra to install a junction box because the wires had to be cut to put in the pocket door.

So, he’s already paid and gone. I didn’t think we’d ever hear from him again, even though Patrick was trying to contact him.  Patrick was livid.  Like really mad.  He left him a voice message and texted him pictures of the issue.

Tuesday, Patrick left another voice message. And then texted again.

Then MAN called him back.

It went something like this. (I’m paraphrasing; I wasn’t there.)

[P] Hey man.  Your guys left live wires hanging in my basement where you were supposed to install that junction box.

[MAN] What wires?  We didn’t cut any wires in the basement.  That wasn’t my guys.

[P] Yeah, man, it was your guys.  You even texted me pictures of it a few weeks ago, letting me know that you found wires in the walls and that you needed to charge me an extra $140 to re-route the wires and install the junction box.

[MAN] Oh, yeah yeah yeah.  Those wires.  But I don’t think that we cut any wires in the basement.

[P] Yeah, man, you did.  And then your guys just left them hanging there and turned the breakers back on.

[MAN] Oh, well, I can get my guy out there to install the junction box this afternoon.

[P] No, man. That’s okay.  I’ve already got an electrician coming out later this week to fix this issue and do some other work for me.  I just want you to refund the money we paid you since you didn’t complete the work.

[MAN] Oh, well that $140 wasn’t all for the wires and junction box.  It was for some other stuff too.

[P] Okay, whatever man.  Just wanted to let you know that this happened.  And, since you were the general contractor, I thought you’d like to know your guys left this situation.  Also, though, shouldn’t have you known about this and checked all their work before now?

[MAN] No. no, man, that’s your job.  You’re the homeowner.  You’re supposed to check all the work and make sure it’s completed.

[P] Well, then what am I paying you for?  I mean, if you’re going to sub out the work and then I’m responsible for checking and approving the work, what do I need you for? (laughing, light-heartedly, because my husband’s got mad skills.)

[MAN] Oh, well, you know man.  I just make it all come together and get my guys in there to do that actual work … [blah blah blah].  But, I’ll give you $40 back for the junction box and work we didn’t complete.

[P] Thanks, man.  One more thing … just wondering … Before this all happened, I thought everything was going really well.  We had a pretty good working relationship.  And then it just deteriorated overnight.  What happened?

[MAN] Well, I don’t want to say anything bad, and come between a husband and wife … but your wife got kind of negative there and I just can’t work with that attitude and karma around me.  It’s just not a good situation to work in, so I just finished the job and bowed out.

[P] Okay, man.  Well, we’re about to sell our other house, and we’re just dumping all of that money into this house, and I basically wanted someone to hand it to in exchange for all this remodeling work … but she’s my wife, so I think that you understand whose side I’m going to fall on in this exchange, right.  It’s been nice working with you, thanks for your help man.

[P] Well, thanks.  I’ll keep an eye out for the money.  Hope your future endeavors go well.  Bye.

5 minutes later, Patrick gets a text. … [From MAN]

I looked at the pictures again. I’ll give you $70 back instead, split the original added cost.

Just for the record, all of this stuff happened BEFORE the relationship soured.

Patrick brought up all this half-ass work BEFORE I got pissy, and MAN just gave us excuses.

Literally, MAN worked on the house for 2 weeks prior to me getting salty on a Sunday afternoon.  MAN was schedule to meet the city inspector on Monday; then finished the drywall work on Tuesday, and we paid him on Wednesday.

We found the wires on Saturday.

The lying, mess, stolen stuff, bad communication, outlet situation, gouges in our newly finished ceilings … all happened prior to that Sunday afternoon.

I stand by my right to be and act mad.