So, Friday night?  After we finished working ALL week on the house and felt like it was a mad rush to the finish?  We left Cincinnati, headed home, and walked to the Club for food & drinks.

It was a nice treat.  It’s been more than a few weeks since we’ve been there.

We went to bed promptly upon arriving home after dinner (@ 10pm, and more like, we had no choice, just kind of fell into bed of exhaustion and confusion) and didn’t wake up until 8:30am on Saturday morning.

It was a pure, glorious, completely uninterrupted night of sleep … with no alarm clock set for the next day.  And we both so badly needed it.  I’m not sure I woke up even once, all night long; we were THAT drained.  Then, we took our time, made coffee at home, stopped at Blue Ash Chili for some food, and then off to work more.

Our new mattresses were being delivered on Saturday, so we had to be to the house by 1pm.  Wouldn’t you know it … these guys were running early too?  So, we went to the house first, got our mattresses, and then made a trip to Menard’s for outlets, switches, and cleaning supplies.  After that, it was time to work.

We started immediately with replacing all of the old, almond-colored switches and outlets with the new white ones.  I started in the kitchen, then moved on to all of the switches.  Patrick started with outlets.  We had a combined 60+ to replace in this house.  It took us 5+ hours – but we did them ALL.  Except 1 stupid switch that needed a special switch, which we still have to go back and buy.  Afterwards, we also hung the new lights in the foyer and main level hallway.  We have the light for the kitchen eating area, but need to move the table in there first (so we make sure to hang it at the correct height).  We also have a new ceiling fan on order for the living room, and should get that this week (hopefully) – so it’ll be hung before we move (hopefully).  It was a good, but long, day.  We left there around 8-8:30pm. [And went home and went to bed and slept uninterrupted for an entire night again; it was great, again.] 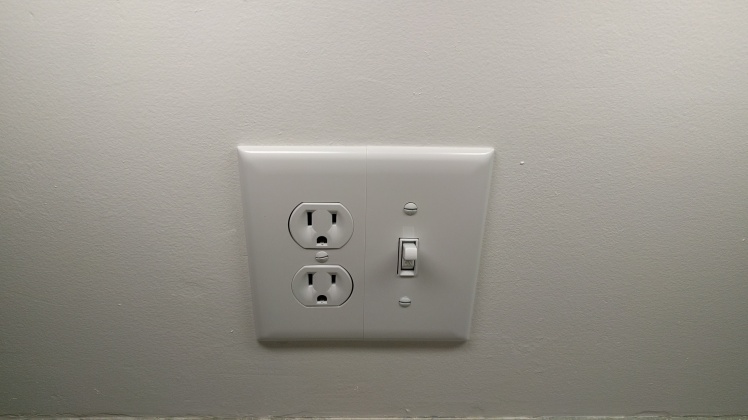 Oh, and the landscaping company came to mow the lawn … and it looks so good!  (We can’t wait until we have a deck out here and can use all of that side yard … it’s just sitting there, being wasted right now!)

On Sunday, we made a quick stop at Menards to buy a couple of switch/outlet plates we mixed up on Saturday and a shelf for the garage so we could organize all the tools & paint, and then went directly to the house.  We arrived at the house before noon, and started cleaning.  Cleaning was literally the ONLY thing on our agenda for Sunday.  Patrick started in the garage.  I started in the kitchen.  He moved on the basement.  I kept working in the kitchen.  He came up and started on the main level floors.  I was finishing up in the kitchen.  (It took SO long to take the whole fridge/freezer apart and clean it out … but it was gross, and I’m super particular about the kitchen & bathrooms being SUPER clean when I move into apartments/houses.  It took a LONG time.)

I had a pretty bad experience in the kitchen.  I pretty much ruined our new floors.  Patrick is a hero.  There was no hope.  Then Patrick produced a miracle.  (*Final outcome still unknown.)

Here’s what happened:  I sprayed Oven-Off into the oven to clean it.  While that was soaking, I started cleaning the fridge/freezer.  I had a plastic/paper protective sheet on the floor beneath the stove … but as I was cleaning the fridge (which is right next to the oven), it slipped out from right under the oven.  And, I didn’t even notice the oven was dripping grease & cleaning solution!  It was BAD.  Like, REALLY BAD.  It dripped on the cabinet, then onto the floor.  And, while it hadn’t been sitting for long, it’s impossible to lift that grease/cleaner out of hardwood after any amount of time.  Totally. Ruined.  We went back and forth, trying to clean it up a few different ways.  Nothing worked.  (Obviously, duh.)  Then, Patrick said he was going to try to lightly sand it out.  We figured it couldn’t really get worse than it already was … and we knew (based on the recommendation for the huge scratch in the master bedroom) that the only professional fix was to buff and re-poly the entire room – which was not really an option at this point.  So, he got a piece of very fine sandpaper and started sanding the drips by hand.  It was working!  The stains were coming up!  I mean, he was also taking the finish off of the floor … but there the grease stains were disappearing!  If we had let it sit there any longer, we probably couldn’t have done that.  The grease would have continued to soak into the floor and just ruined it permanently.  Thanks to Patrick’s quick (unhesitating) ability to just go ahead and sand our brand new (albeit, ruined) floors, we now have no stains.  (*I still have to re-poly that area, so we’ll figure out if the final outcome is great or not later this week.) 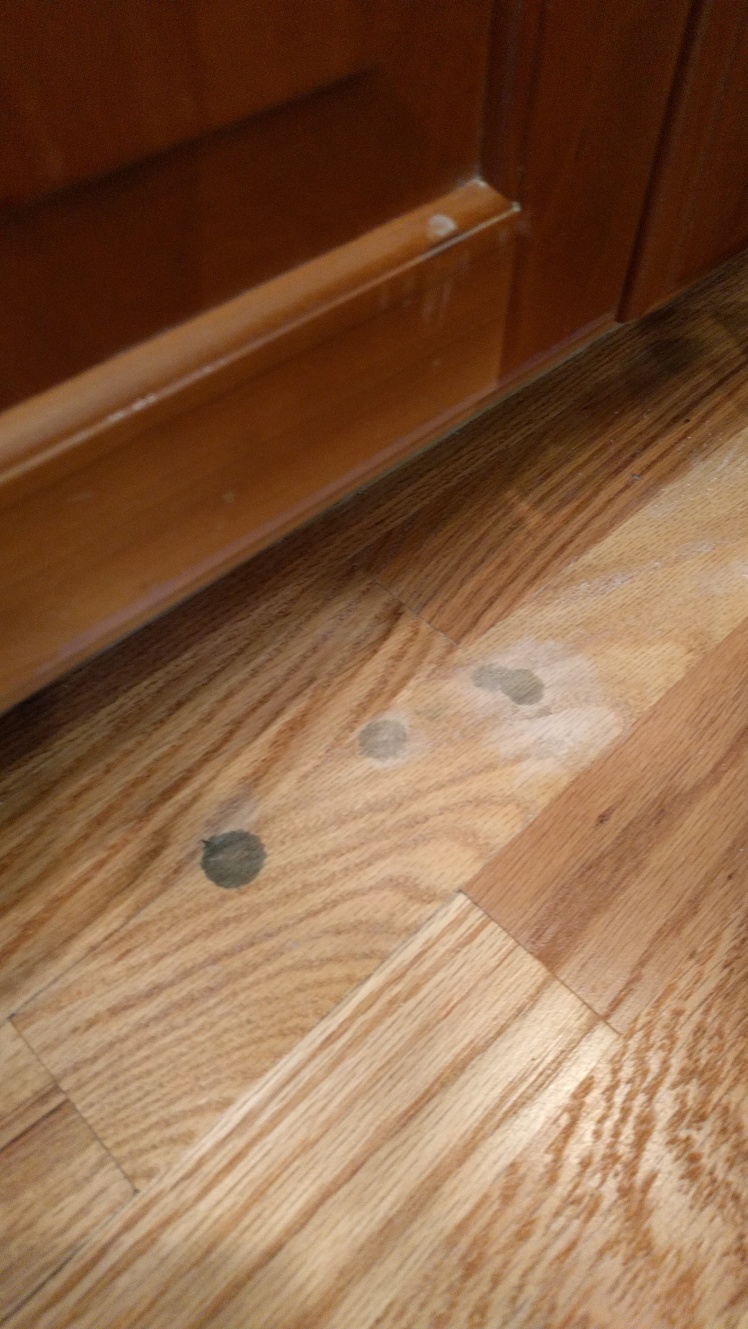 Moving on, once the kitchen was clean, I moved up to the upstairs bathrooms.  The main hall bathroom was a mess – all the contractors had been using it, the wallpaper was half removed, there were still discarded toilet paper holders & towel racks laying on the floor, drywall goop in the bathtub – it was a mess.  I started there.  It also took a while.  (Side note – I had also cleaned it several times while the contractors were in & out of the house; we’re not gross.)

Patrick moved upstairs also.  By now, I was cleaning the master bathroom, which was also gross, but not in the same way.  It needed the drawers cleaned out and disinfected – there was still goop from the previous owners in there.  (By the way, do you guys remember me saying that we had hired and paid a cleaning crew, oh, like a month ago to take care of all this for us … yeah, we did, they didn’t.)  Then, while he was finishing the floors upstairs, I finished installing all of the new filtered vent covers upstairs.  That place looked good, and felt like a real house again. 😊

After we were both completely DONE, we decided to clean the floors ONE. MORE. TIME.  Patrick swiffered. I mopped.

The house was cleaned.

It looked clean.  It felt clean.

And, Patrick had to go back on Monday morning to meet the claims guy for the floors – and he said he walked in and it was still clean!  WIN!  (Because in previous instances, we’d come back the next day, and it was no longer clean – drywall dust ALL OVER; sawdust ALL OVER; dirt ALL OVER – again.) 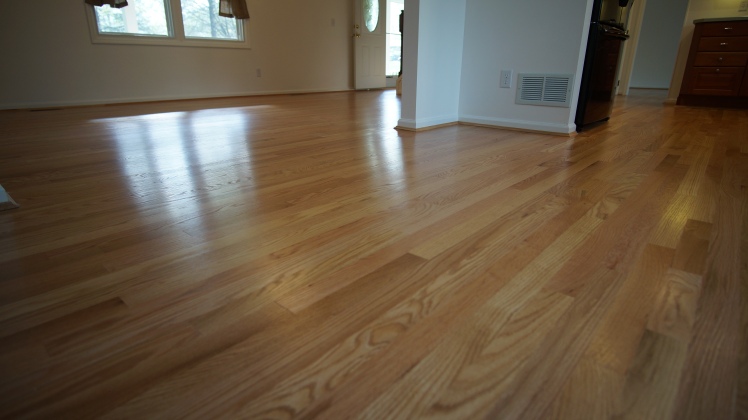 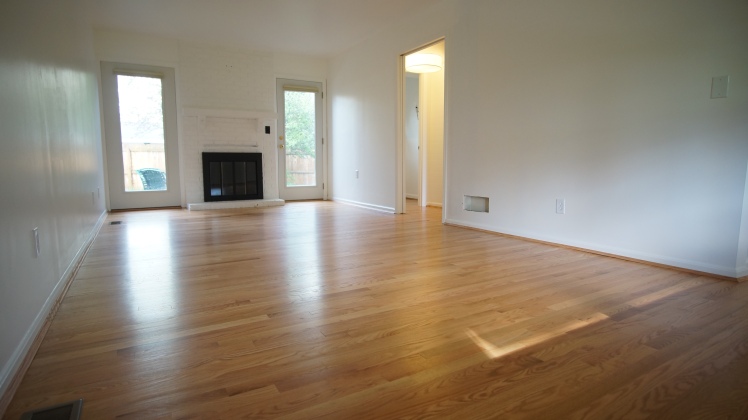 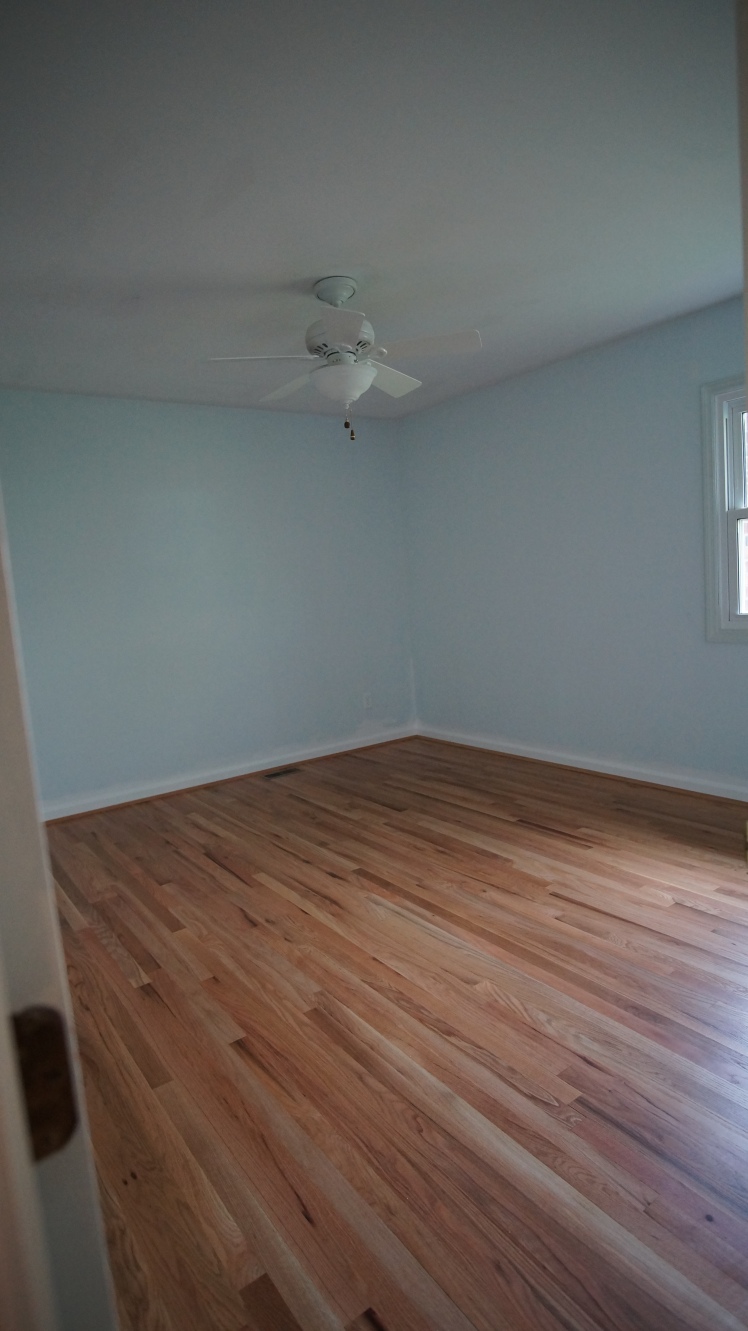 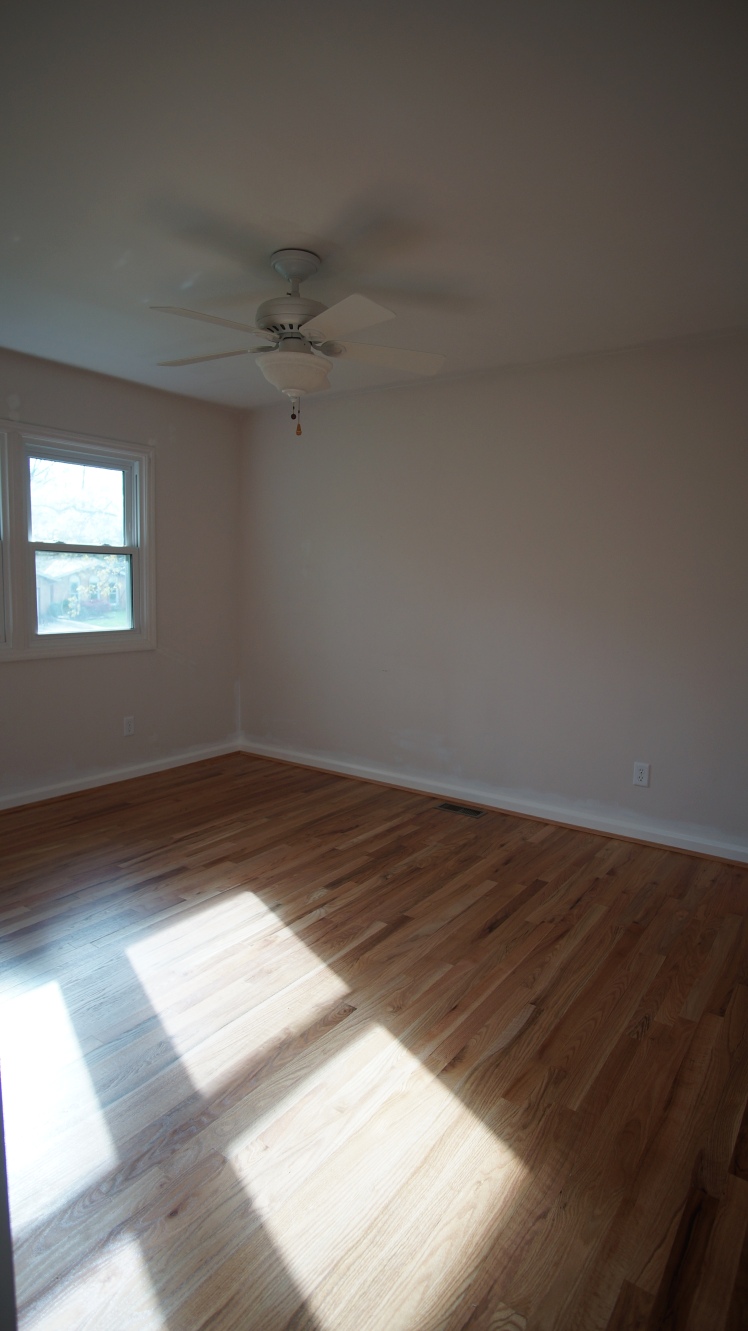 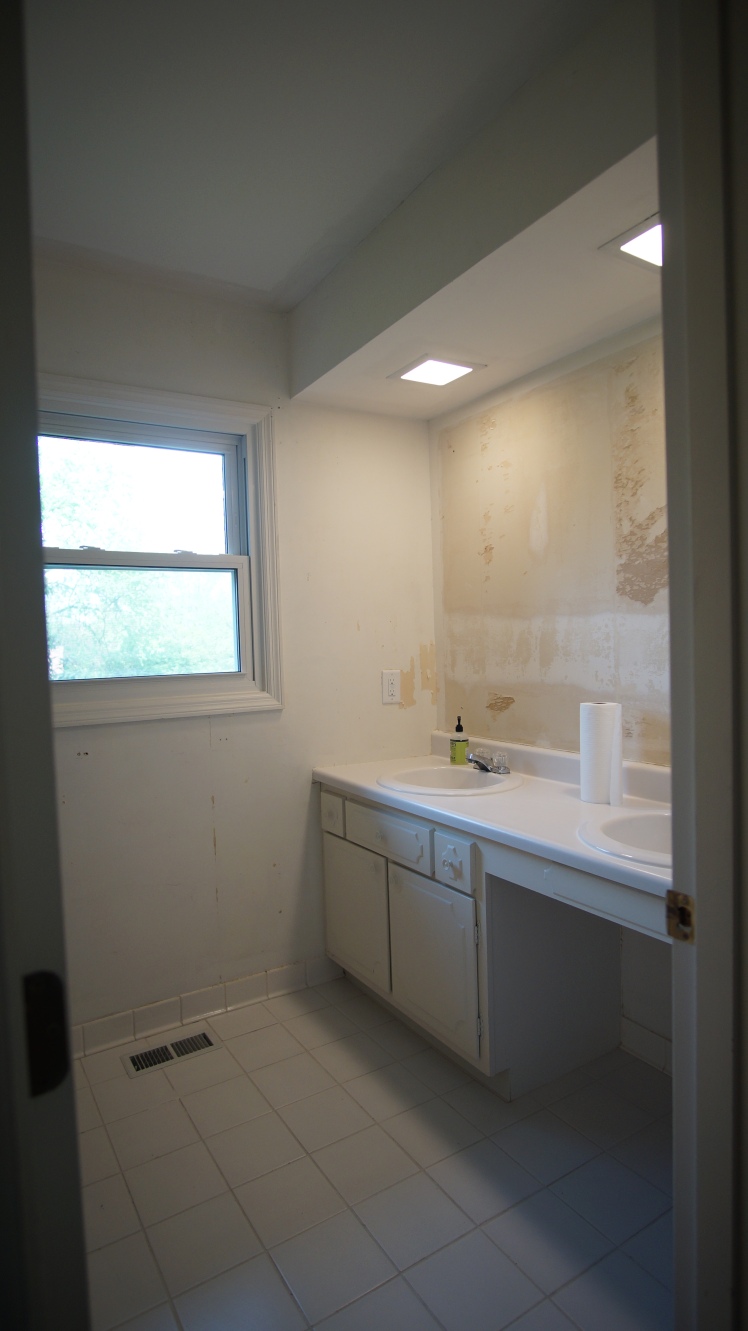 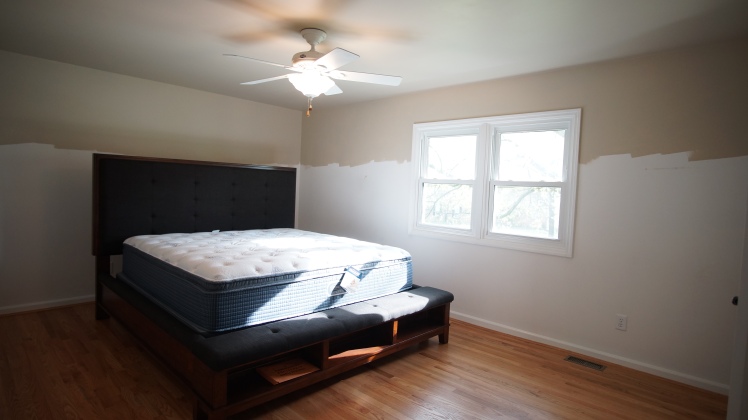