While we haven’t gotten any more BIG projects or rooms finished yet, we have been chugging away at making the house more livable.

We’re easing back into the big projects, I swear.  I actually really want to get some stuff crossed off the ole’ To-Do list, like really bad.  Plus, I just hate looking at the unfinished walls and mess.

Anyway, here’s an update on what’s been happening this week.

I did finally re-poly the kitchen floor area that Patrick sanded (after I leaked cleaning solution on).  It looks great.  You can’t even find it.  There’s no blemish and it’s like it never even happened.  And, even if I point it out to you, you couldn’t tell me how big or small or where the original floors stop and where the fix begins. 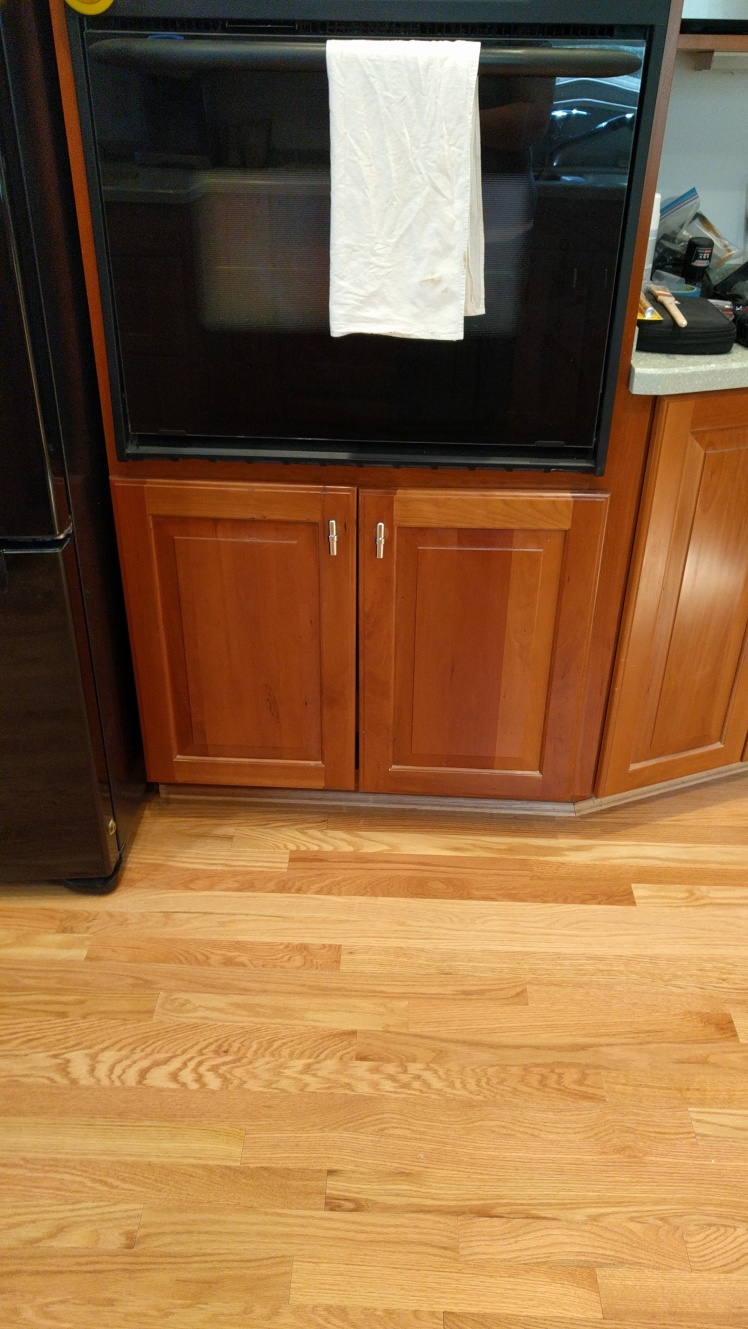 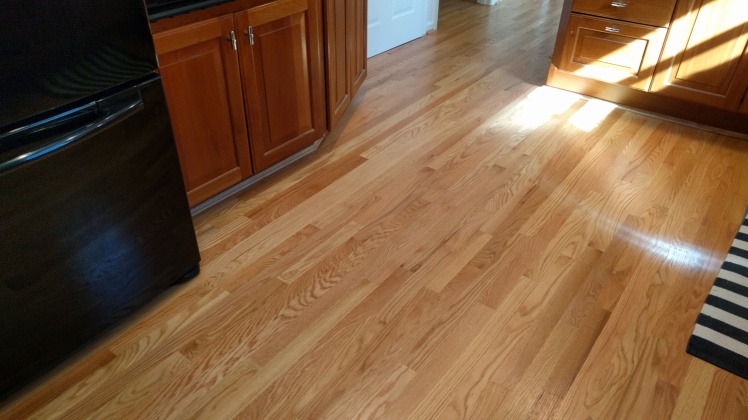 I finally hung our curtains in the master bedroom. (At least we’ve had big, full oak trees in front of those windows?) 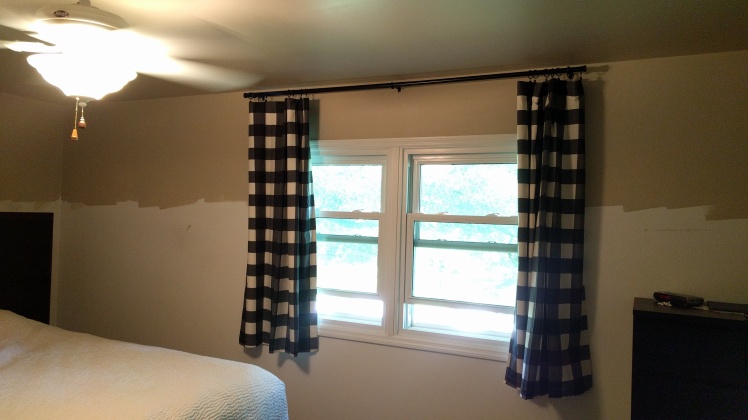 I also hung another towel ring in the master bathroom.  We’re going to be using this room as is for at least another 6-12 months, while we figure out just how big of a renovation we actually want to do in there.  (The original plan was to literally gut everything, move the shower and sinks around and build it up from scratch.  Other options include: again, gutting the bathroom, but leaving plumbing mostly as is and rebuilding from there … OR, we leave everything literally as it and just modernize the current bathroom.)  We’re taking our time with this decision; and while, when we moved in, it was the highest priority, it’s dropped because we want to make sure we’re 100% on our decision before committing to that project. 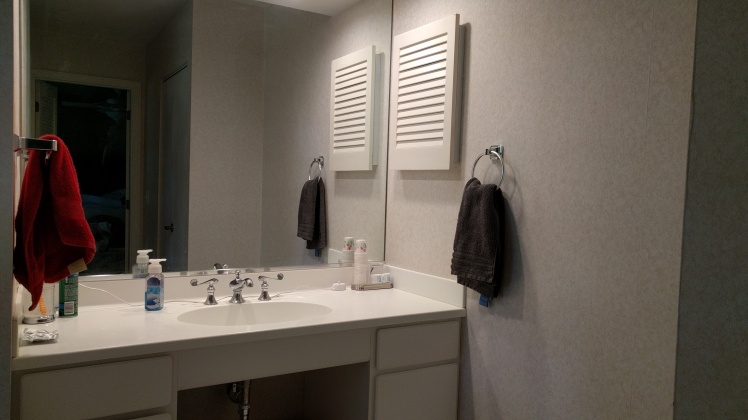 I also found new curtains for the front guest bedroom, so we bought those and I hung them up. (I know, so far this post is just SO exciting! 😉) 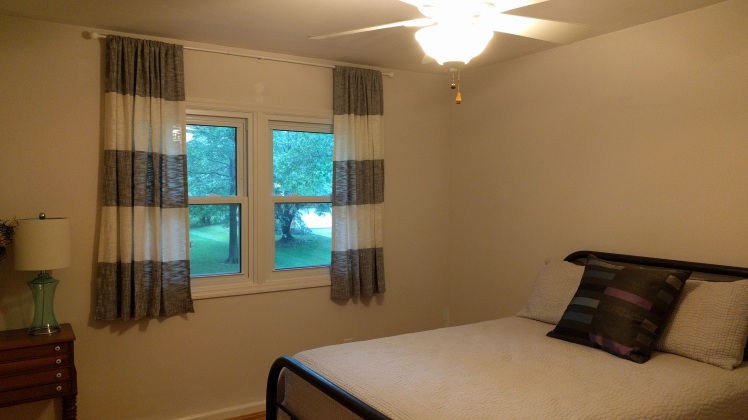 I finally cleaned out the garage. It’s not finished.  We still need to buy hooks and hangers to organize some stuff on the pegboard, arrange the tools so they aren’t just propped up in corners, and hang the bikes out of the way.  But, PROGRESS; it’s happening.  All of the random boxes are broken down; half went into the recycle today and half will go next week. (Huge win!)  The moving boxes are all broken down and we’re going to try to just give those away to be reused.  About half of the pile in the middle of the garage goes to garage sale/donate, and the other half is waiting to be moved to the basement.  And the boxes all stacked up on the one side is (1) our new patio door (should be installed next week!) and (2) the patio furniture (should go out on to the new deck next week!).  What does all this mean?  Well, by next week sometime (maybe the week after), we’ll have a garage we can park our cars in – Yay! 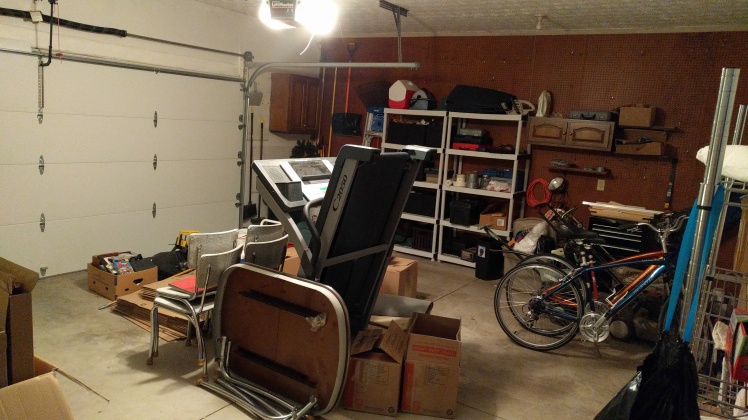 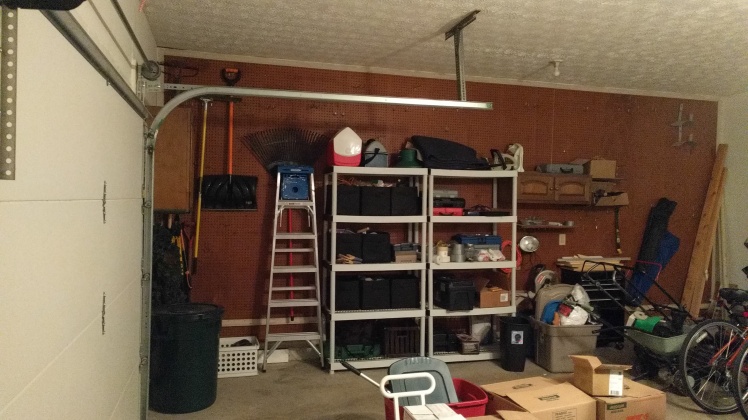 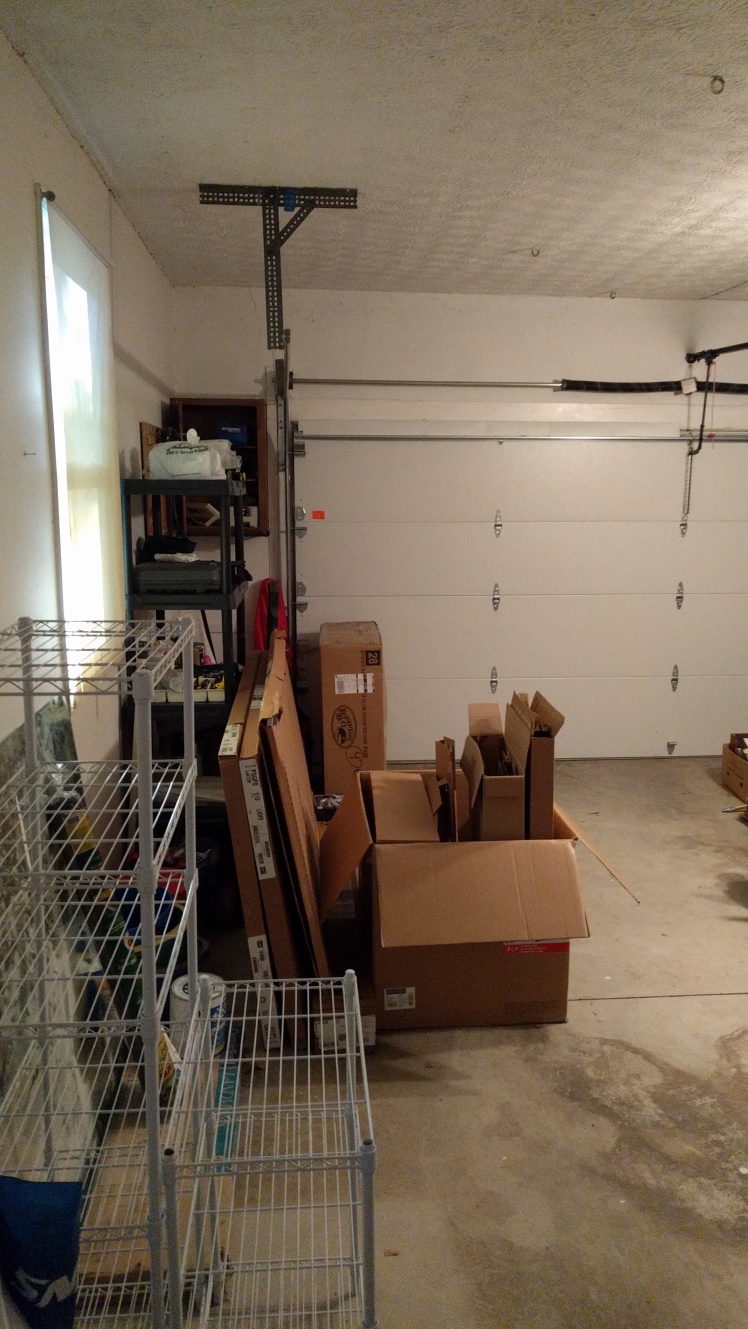 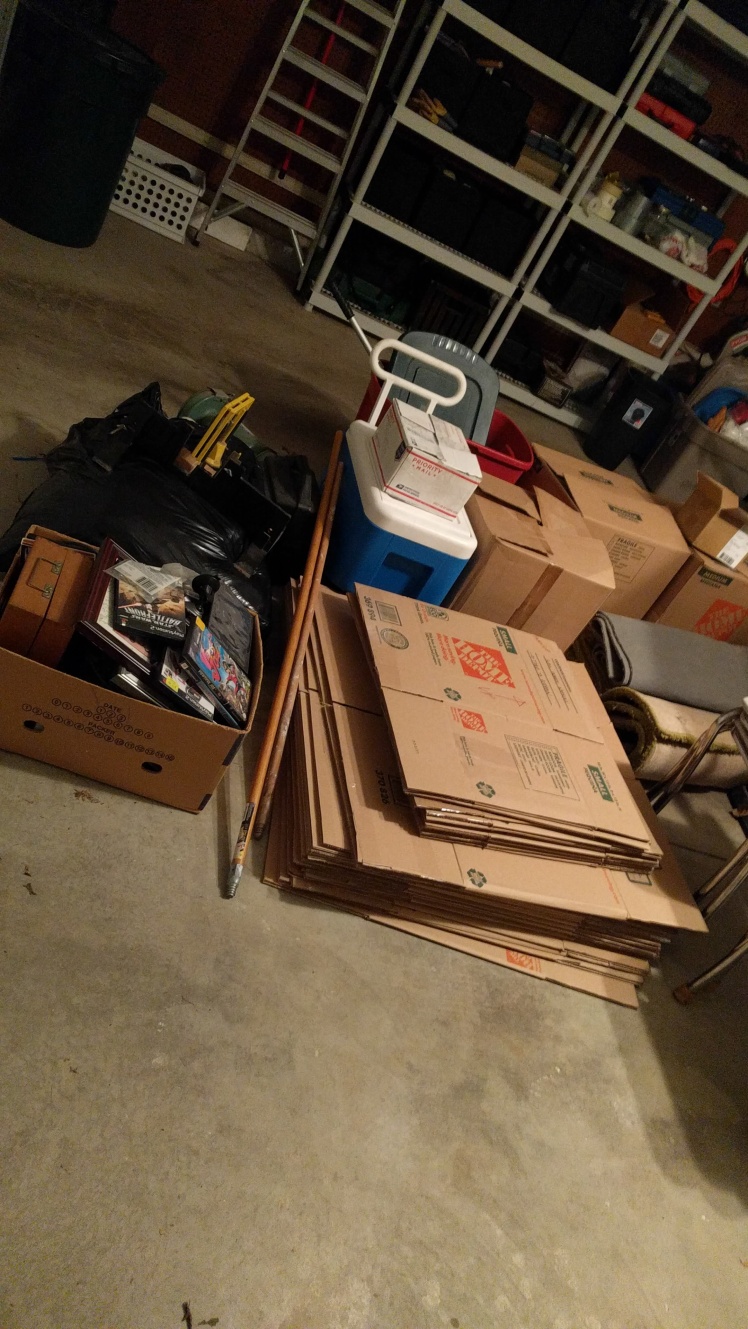 And, the big update … They started building our new deck! Demo work started last Tuesday morning, and permits came in that Tuesday afternoon.  First set of inspections (on the holes) happened on Wednesday, and once that was approved … we were onto framing, laying deck board, and installing rafters!  I think I could keep gushing about building this deck on this blog … but I don’t think that our excitement is coming through in full, like at all.  We are SO excited.  Like, SO excited.

There’re been quite a bit of work beforehand and also some changes during … and when it’s done, I’ll do a full post on the whole process … but so far, I can say that this crew is amazing.  We really wish we could have found them earlier in this home renovation.

And, so far … only 1 day of rain!  And, we’ve had crazy nice weather (read: high 70s and sunny with a breeze), so these guys are loving the outdoor work right now! … & I’m momentarily re-thinking my indoor, desk job. 😀 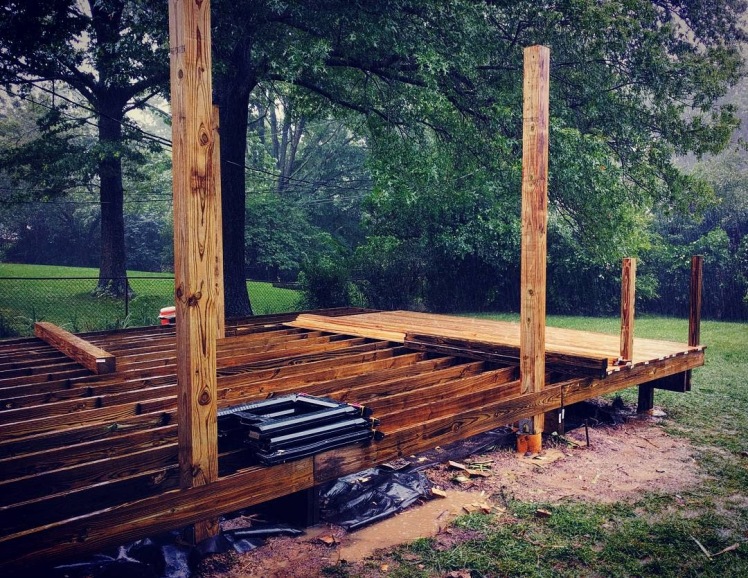 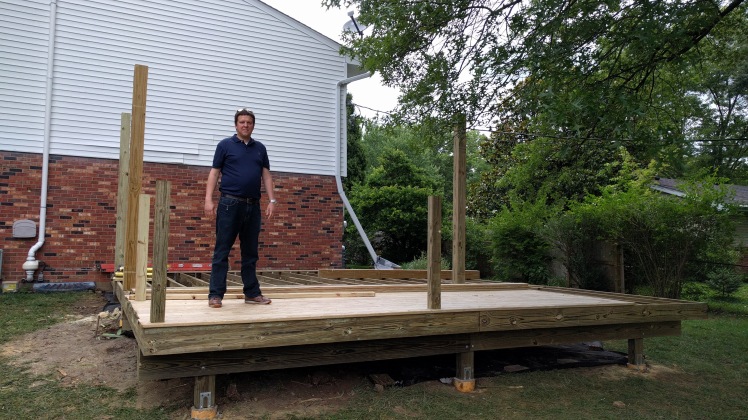 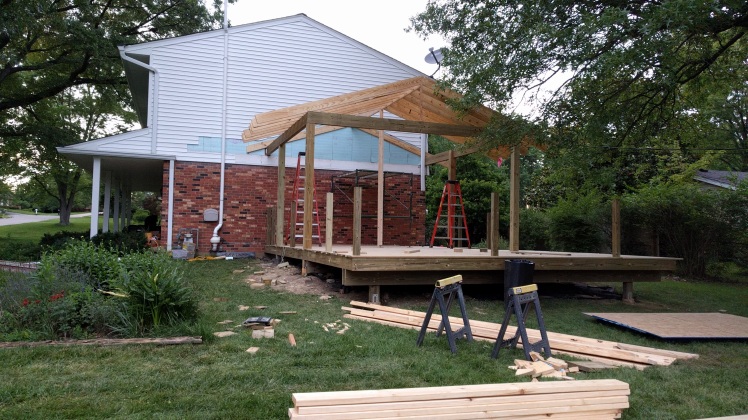