Seriously, it’s been so long … both since I’ve updated this blog … and since I’ve had anything to update it with.

So, don’t fret … you haven’t missed anything.  We haven’t really done any major renovations since the last update.

But, just to get everything up to date, below is some stuff we’ve finished or are in the process of working on … and also a list of stuff that is on the docket for this fall and winter.  (These were all finished over a the period of time since I’ve been not writing on this blog … so like, some back in July 😳, and some as recently as this past week.)

And, for the record (my official record anyway), we’ve had like 2 free weekends since the end of July, and we literally have about 2 free weekends, excluding holidays, through the end of the year.  So, we have been and are going to be pretty busy.  And then, well, it’s the holidays, so probably not much is getting done then either.  BUT, then it’s the winter, and who doesn’t want to paint in a cooped up house?

The Big Stuff (only one thing):

We hired someone to paint the stairwell, and tacked on the upstairs hallway while they were here.  I didn’t want to pay for it … but I also didn’t want to buy scaffolding and couldn’t reach that area without it.  So, we bit the bullet and hired a painting company to do it for us.  It was worth it.  He came out to quote on Tuesday, but since it was summer, he said outdoor jobs took priority.  We were totally fine with waiting, even if it was not done until this fall.  But, as luck would have it, it rained that week and he was able to squeeze us in that Thursday.  It took 2 guys all morning, and 1 guy the rest of the afternoon.  And now it’s done. 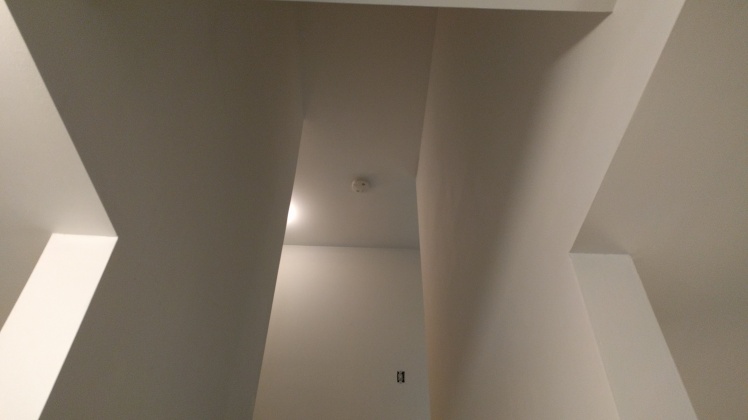 We got our new couch … and it works so much better.  Now, we just need new end tables, ottoman, side chair, TV stand, and some art maybe for the walls … and then the LR will look so great.  But, really, seriously, we both really like our new couch.

I finally hung the shade in the half bath on the main level.  I can’t remember if I lied about doing that already in a previous post … but I hadn’t done it if I did.

Quick recap:  The first order of shades was great, with 2 exceptions.  The half bath shade was about 1.5” too short, and there was a blue pen mark on the top of one of the den shades.  So, I called and they said they would send replacements ASAP; all I needed to do was email pictures of the damage.  So, I emailed the pictures; they processed the re-order, and I received the boxes back at the beginning of August.  I pulled them inside, set them in the den, and they have LITERALLY sat there for 2 months.  (I’m maybe a little embarrassed, but totally not kidding.  I didn’t even pick them up to clean; I just vacuumed around them.  For 2 months.)

Well, last week, I opened the boxes … figuring, it was my fault I didn’t check the order, and if these were wrong too, well, I’d have to suck it up and work with the flaws or pay for new ones.  Well, turns out they duplicated the ENTIRE order and just sent us new everything.  The half bath shade was cut correctly, and it hung very nicely. (I’m not lying anymore; it is actually hung up and below is proof.)  And, well, now I have 10 extra shades, 2 from the first order that were “damaged” and another 8 that are literally just duplicates from the first order.  I know I won’t need them all, but now I have a couple free shades for the upstairs bathrooms and I’ll store the others, just in case? 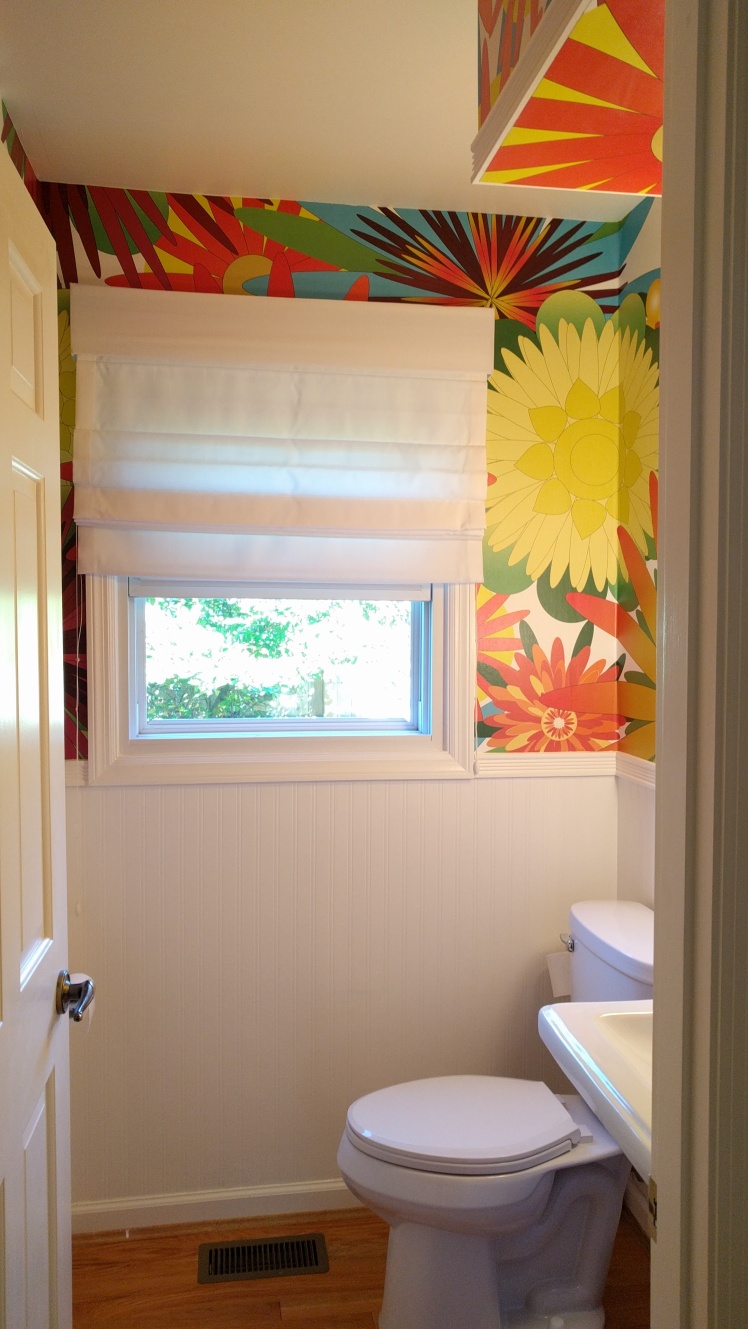 We hung the kitchen light.  I bought this light way back while we were renovating the house.  I bought it at the same time I purchased the hallway and foyer lights for the main level.  But, then we decided not to hang it right away.  Since we moved forward building the deck so soon after moving in, we didn’t want to center the light above the table until we knew where the table was going to sit.  We weren’t sure where the table was going to sit until after we put the door in for the deck.  So, we just waited.  Then, after the door was installed and the deck was finished, we hung the light.  (And patched the ceiling where the other light hung, but until recently, didn’t paint or “finish” the repair … new post coming soon on interior finishes that we had to do after the deck was built and the door was installed.)  Anyway, it looks great and we’re happy with it.

Closet guides and shoe molding repairs are in progress.  So, they took out some of the closet door guides when the put the floors in, and we needed to re-install them.  Patrick got the foyer and his closet installed … but my closet it still in-progress.  He had to shim the guides to make them taller, since we removed carpet and some thick padding.  (We may in the long run get new doors upstairs, but for now, shimming works.)  Turns out for some reason, my closet doors were shorter than his and require one more shim piece, which needs to be cut, glued, and poly-ed to match the floors before we can install it.

Also, the foyer doors were not tall enough to close over the shoe molding, so either we had to cut the corners of the doors, or cut a gap in the shoe molding.  I opted for the latter.  It didn’t take much, just pulling the piece of shoe off, cutting it down, and re-installing … it’s just one of those tasks that is kind of tedious and small considering the mess … get out the miter saw, sand paper, nail gun … cut the 2” off each piece … nail and tap … clean it all up.  The prep and clean-up take longer than the task … so it just took a while to get around to it.  It’s done now.

Also, I finished stripping the wallpaper in the upstairs hall bathroom.  Oh, and we hung some mirrors, so the bathroom is at least usable.  The walls look horrible (in need of some serious spackle & caulk) and the lighting is definitely not doing anyone any favors since there’s just some bulbs up in those cans … but now there’s nowhere for it to go but up (which is definitely the easier part of the renovation, mentally anyway).

Next up on the agenda … finishing the interior kitchen work from the patio door installation, painting doors & installing new hardware, painting bedrooms, painting the office & installing bookshelves, renovating the upstairs hall bathroom, refurnishing the living room … and that’s just the items on the top of the list.

Oh, and did I mention that we’re waiting on a quote for the basement remodel?  Hopefully that’ll come in the next week or so, and we can get that on the calendar as well.

It’s been a BUSY year … and we really are just ready to be done with a lot of these renovations … but life in general has just been so busy that the renovations are frequently residing on the back burner … so, update posts over the next couple of months are going to be infrequent at best. 🤔🤷

Can you believe we’ve only owned this house for 9 ½ months?

And we’ve only lived in it for the last 5 months?